Distance: 8 miles / 12 km (according to Trails of the Angeles), 9 miles / 14.5 km (according to Modern Hiker), or 9.9 miles / 16 km (according to my Fitbit)
Time: 4 hours 40 minutes not including lunch
Elevation gain: 3,200 feet / 975 metres (Trails of the Angeles), 3,266 feet / 995 metres (Modern Hiker), or 4,268 feet / 1,300 metres (Fitbit) [is my Fitbit trying to flatter me?]
Difficulty: terrain-wise, mostly easy if it weren’t for all the spiky plants, though the path is a bit eroded in places; navigation-wise, easy; fitness-wise, cumulatively difficult, though none of it is particularly steep
Drive: 30 minutes (22 miles) from old town Pasadena, west on the 210 to Sunland and then up Big Tujunga Canyon Road
Trails of the Angeles hike no. 11
Modern Hiker’s description is here

It’s hard to think of anything much to recommend this hike, unless you love the mixture of prolonged cardio and having your skin torn to bits by spiky bushes. To be fair, had the haze been less dense over LA, the views might have seemed a slightly better payoff. (And OK, we could have worn trousers, but who likes doing that in the LA sunshine?) We felt properly misled by Trails of the Angeles on this occasion, though: it described the route as ‘the only way [up Lukens] that is not via a long, monotonous fire road’, but this way felt bloody long and monotonous, much more so than the other version we did from the south (post coming soon!), and it isn’t even ‘exceptionally steep’, as promised — just endlessly boring. Things weren’t helped by the fact that since the 2013 edition of the book, the Station Fire damage is long mended. On this fine spring Sunday the brush and other greenery was out in full force, and by the end it all, even the pretty harmless manzanita, felt like pure thorn.

The moral of the story is that we should have trusted Modern Hiker’s assessment of this route rather than Robinson’s and Christiansen’s. He classifies it as challenging rather than moderate, and describes it as ‘relentless’, ‘leg-busting’, and good training for taller peaks. His elevation and distance estimates are also more in line with ours.

So, at Wildwood picnic site, you walk right to the southeastern end of the car park to find the start of the trail. There are lots of little routes through the bushes, but basically you want to get down to the river on your right almost immediately. We didn’t find a crossing place with good enough stepping stones not to take our shoes off, but the paddle was nice — in fact the one at the end was the highlight of the day! Once on the other side of the little river, the path hugs the bank for a few hundred metres before turning south to head up the left side of a (currently) dried-out tributary. After a few more minutes you get to the bottom of the daunting wooded slope, and with a sharp leftward hairpin the ascent begins.

There’s not much to report for the next 3 miles (4.8 km). You do lots of switchbacking in a general southwesterly direction, and you get more and more scratched and annoyed. (Apparently some of the scratchy stuff is poison oak, and some of the purple stuff near the bottom looked like poodle dog bush, so I suppose we were lucky to get only annoyed.) Finally you come out onto the ridge and turn southeast again towards the summit, soon joining a fire road curving up from the south. This loops round the northern edge of the clusters of masts before emerging out to to at least theoretical views of downtown. After a nice chat with Robin and Mike, an impressive local cycling couple who agreed that Stone Canyon has had no maintenance lately, we found a pleasant picnic spot just below the westernmost masts, and enjoyed a doze before contemplating the way back down.

Safely over the raging torrent. 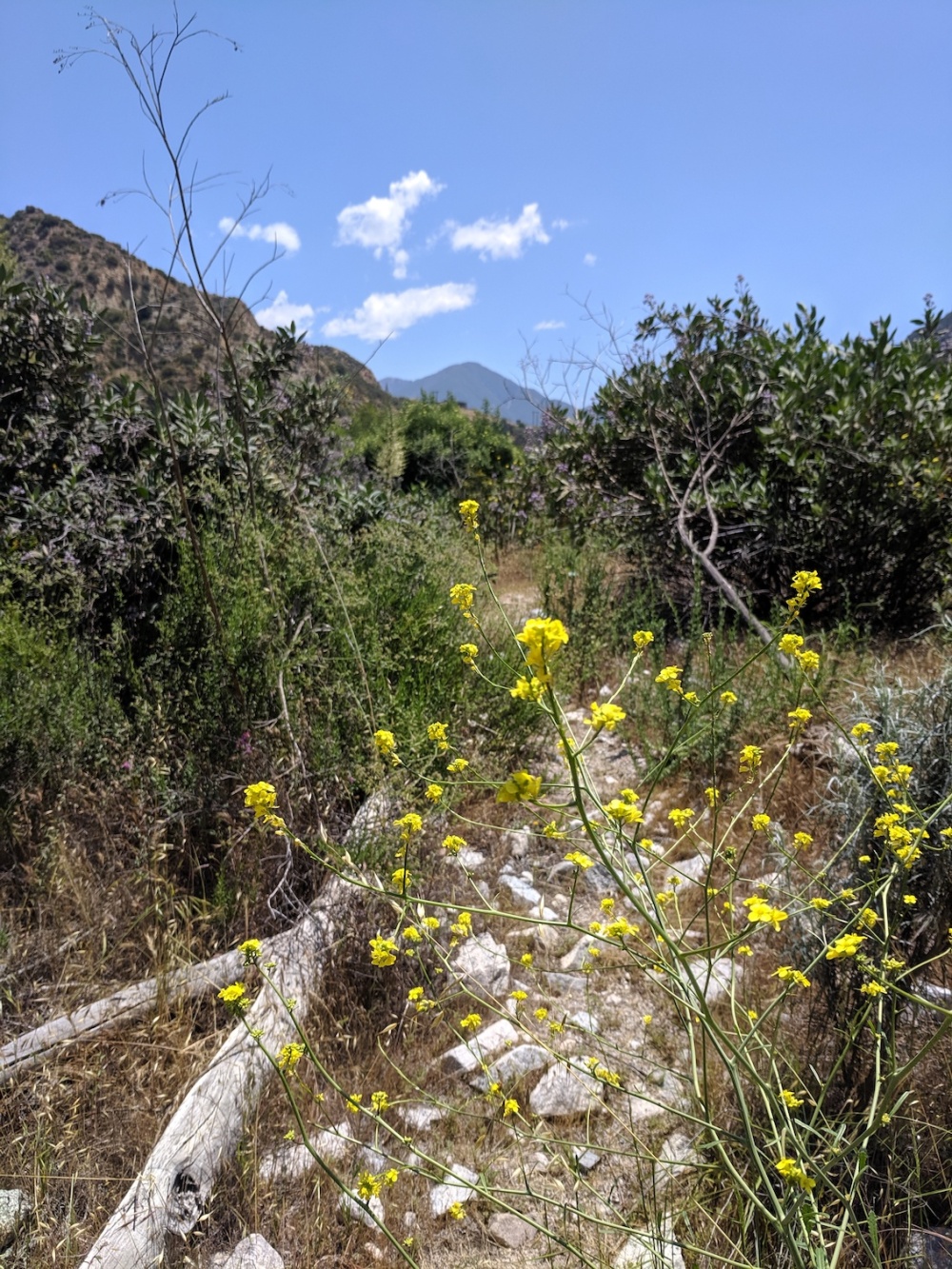 Emerging from the river channel, some springtime prettiness to lull us into thinking the flora are on our side.

The view from the south bank up to where we’re headed: slight ‘oh shit’ feeling setting in.

Just after the path turns mountain-wards. 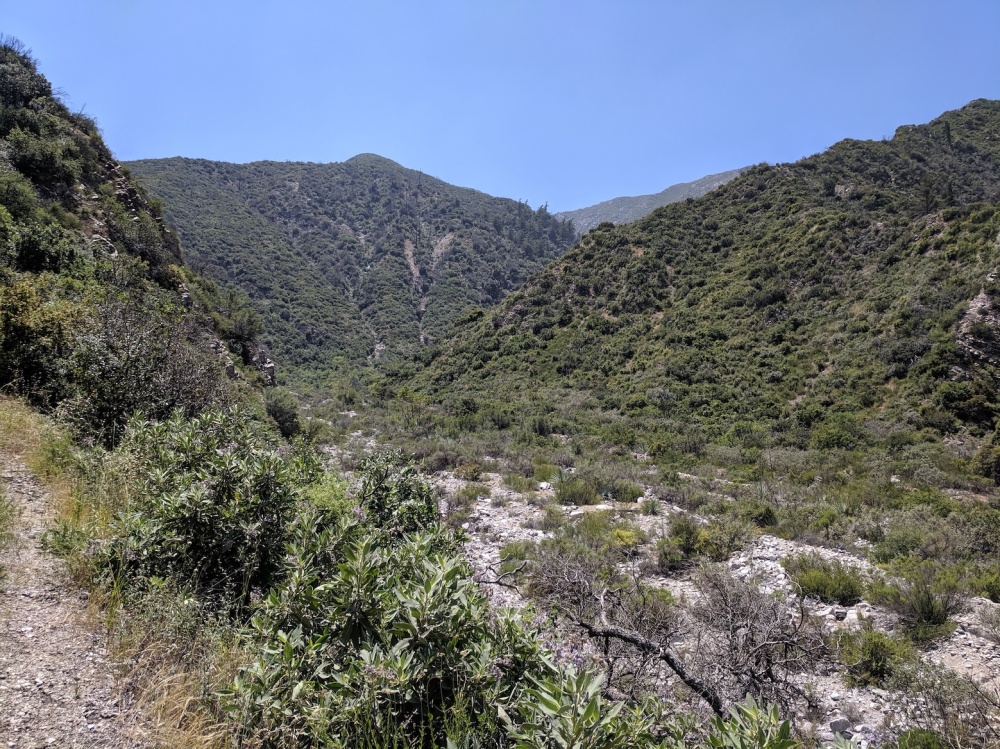 Following the dried-out stream bed to the first hairpin. 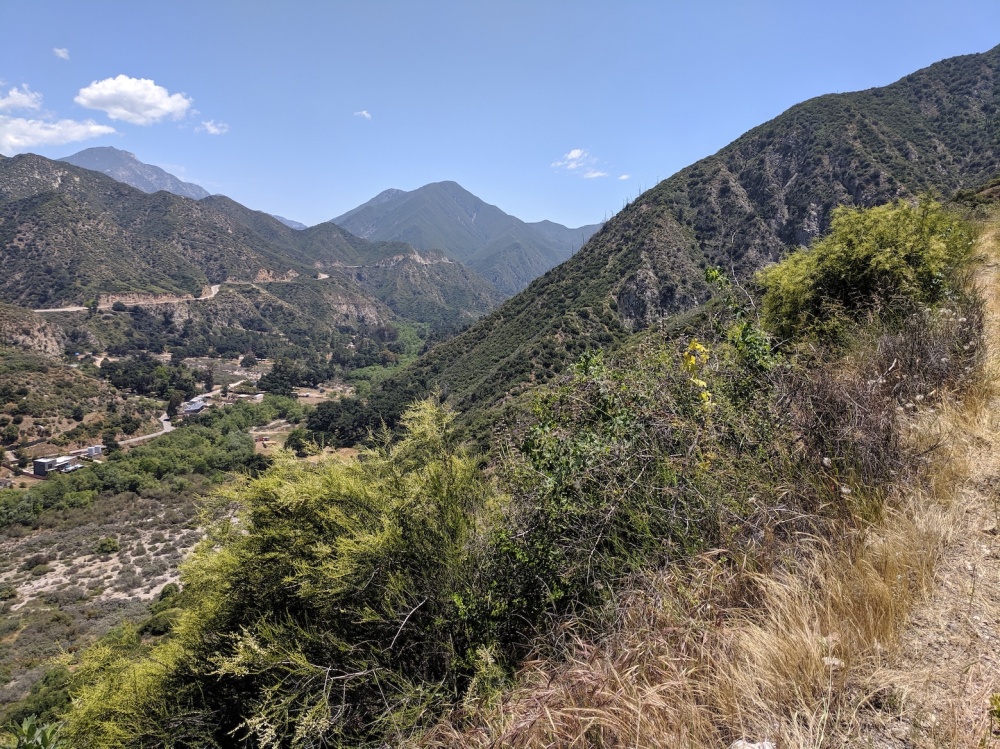 The innocuous start of the full-on vegetation attack.

Finally emerging out on to the ridge, an hour and three quarters later. 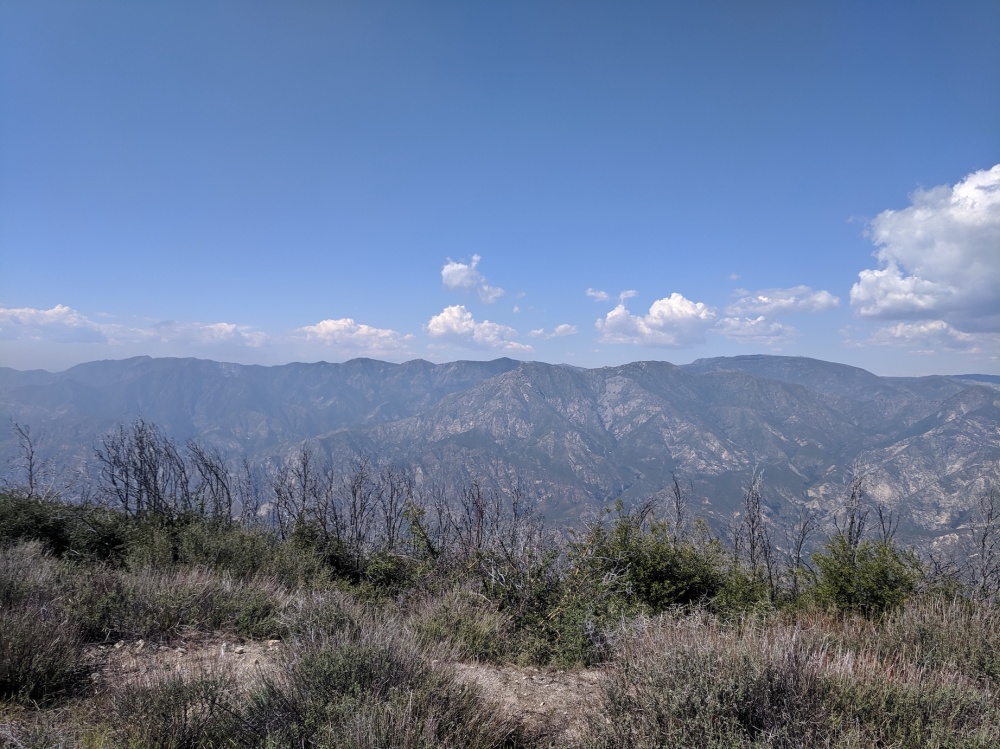 The more attractive northerly views as we began the descent. 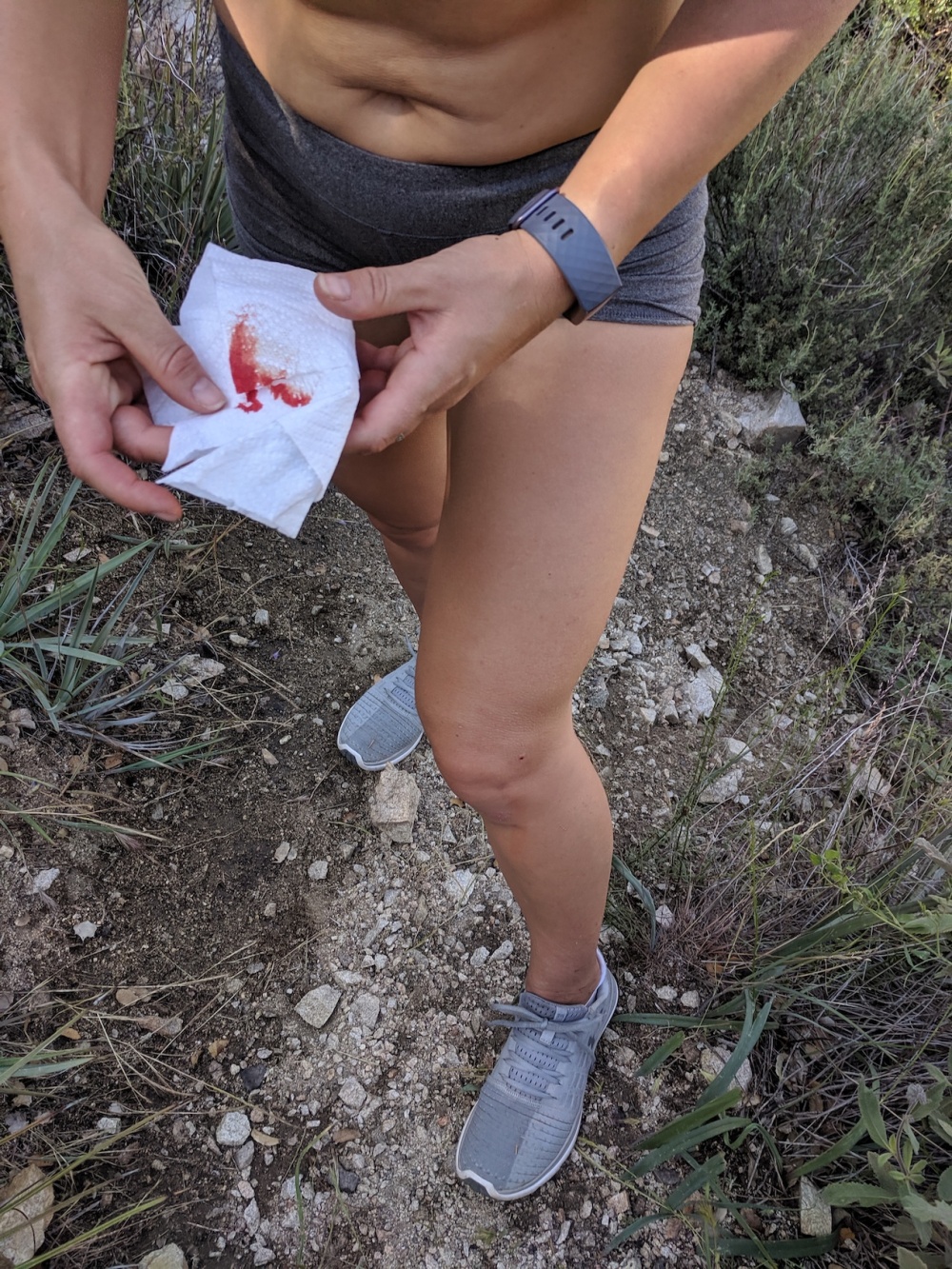 Happy to be looking back at all this now (spot the tiny masts on the left of the far ridge). 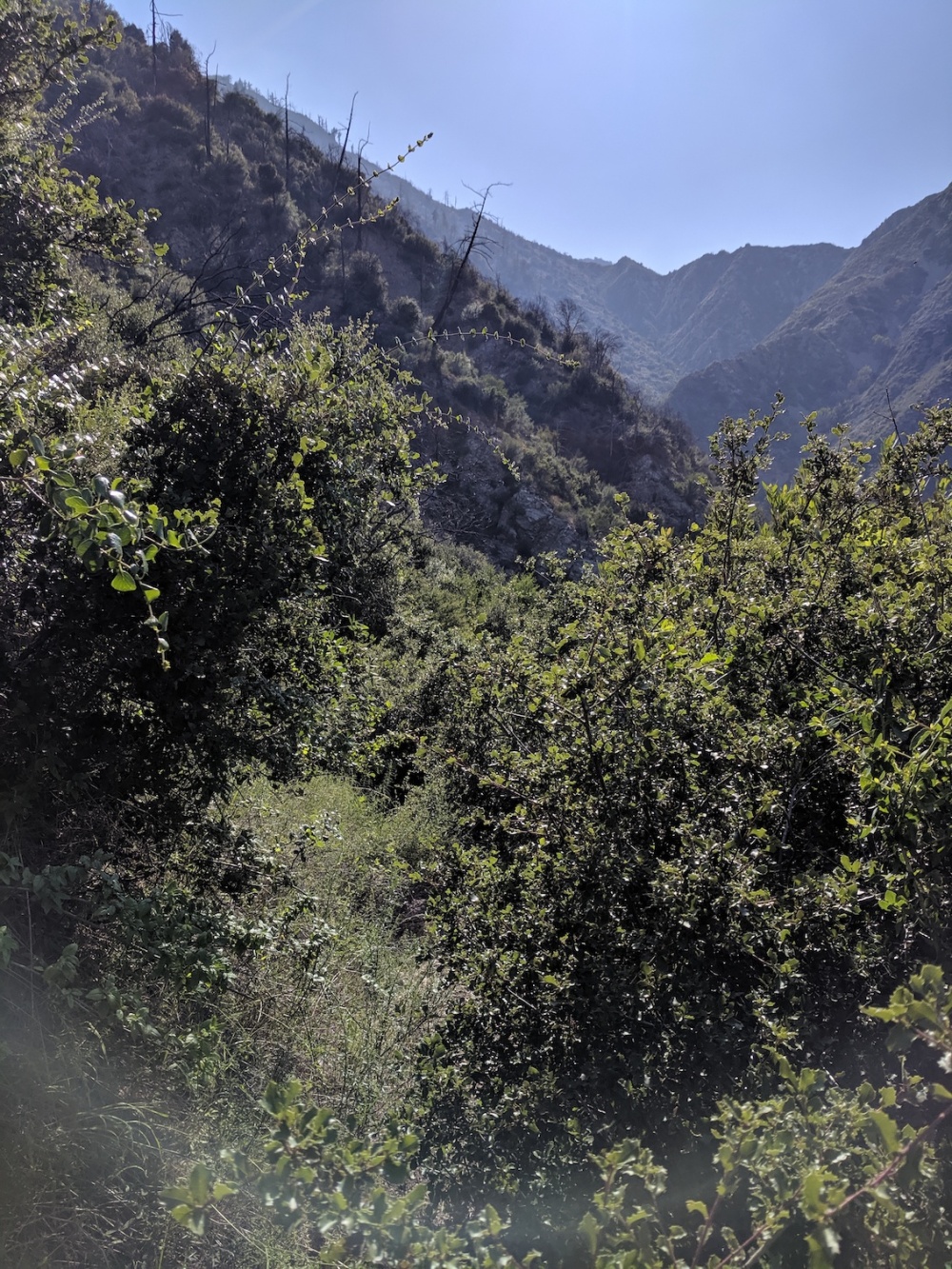 Shorts not rolled up for the final river crossing! And general exhaustion somewhat evident.