This hike is a lovely way to explore the clutch of peaks around Mount Lowe, with plenty of up and down but none of it too taxing.

Start along the track heading west from the parking area along the Mount Lowe fire road, past a handy hand-drawn map and on, skirting the south face of San Gabriel Peak with Mount Markham looking very spiky ahead. The short Mueller tunnel brings you out onto Markham saddle (0.5 mile / 0.8 km from the start), a junction of paths with a water tank and views south back to the city. Here you have various Inspiration Point options, for which you go straight down the fire road or take the trail off to your left. But for this one, take the right fork to start winding your way up the southeast-facing slope. 1.2 miles (1.9 km) from the start, you get to the saddle between Mount Disappointment (named for looking like but failing to be the tallest peak in the front range) and San Gabriel Peak (which turned out to be higher), and from there, northwest along the paved road, it’s not far to the top of Disappointment with its old military paraphernalia: keep left at the hairpin junction with the road that leads back down to Red Box, and follow the road up round to the north of the peak (1.5 miles / 2.4 km from the start). We got to the helipad (elevation 5,960 feet / 1,817 metres) about 45 minutes in. On a different day there would apparently be excellent views down into a “rugged canyon northwest below” and Bear Canyon and Tom Sloan saddle to the southwest, but for us everything was blanketed in the sunny cottonwool of the marine layer.

A few minutes back down to the saddle between Disappointment and San Gabriel, and instead of turning right to go back the way you came, instead carry straight on to the trail up Gabriel, switchbacking up the west and then the east slope of the ridge up to the summit (0.7 miles / 1.1 km from Disappointment, 2.2/3.5 from the start). The only steel here is a little makeshift bench from which to admire the panorama from this, in reality still only the second highest peak in the front range (at 6,161 feet / 1,878 metres), the highest (at 6,164’/1,879m) actually being Strawberry Peak. (San Gabriel is lucky not to have got renamed Disappointment 2.)

Then head back down to the Disappointment/Gabriel saddle for a third time, take the paved road, and this time take the right fork down the road. About 20 minutes in, the road turns north and a path breaks off west up a ridge towards the summit of Mt Deception, quite steeply for 10 or so minutes, and another 10 or 15 more gently up to the summit, at 5,796 feet (1,767 metres), with views west into Bear Canyon. (Sorry, we didn’t record distances for the rest, and Google Maps doesn’t seem to know about Deception. It’s probably about a mile from San Gabriel.)

Then retrace your steps back down the trail and up the road, back to the Disappointment/Gabriel saddle for the fourth time (probably about 0.7 mile / 1.1 km), and back down the trail to Markham saddle (another 0.7). From here, cross over and take the small path leading off to the far side of the fire road, snaking southeast parallel to the fire road for about half a mile before ascending to a narrow saddle between Mount Markham and Mount Lowe. Keep right at the T-junction 0.7 miles from Markham saddle, and take the summit spur at 0.9 miles (1.4 km), to work your way up to the top of Lowe (1 mile total from Markham saddle), where we had lunch. We then planned on adding in Markham itself, but failed to find the trail, which all the maps (and Dan’s write-up in the first link above) suggest heads straight up from that same unnamed mini-saddle. So not quite the five peaks we’d hoped, but these four made for a nice little mixture.

We ended the expedition by driving on up to Mount Wilson and having a little look at the observatory area. 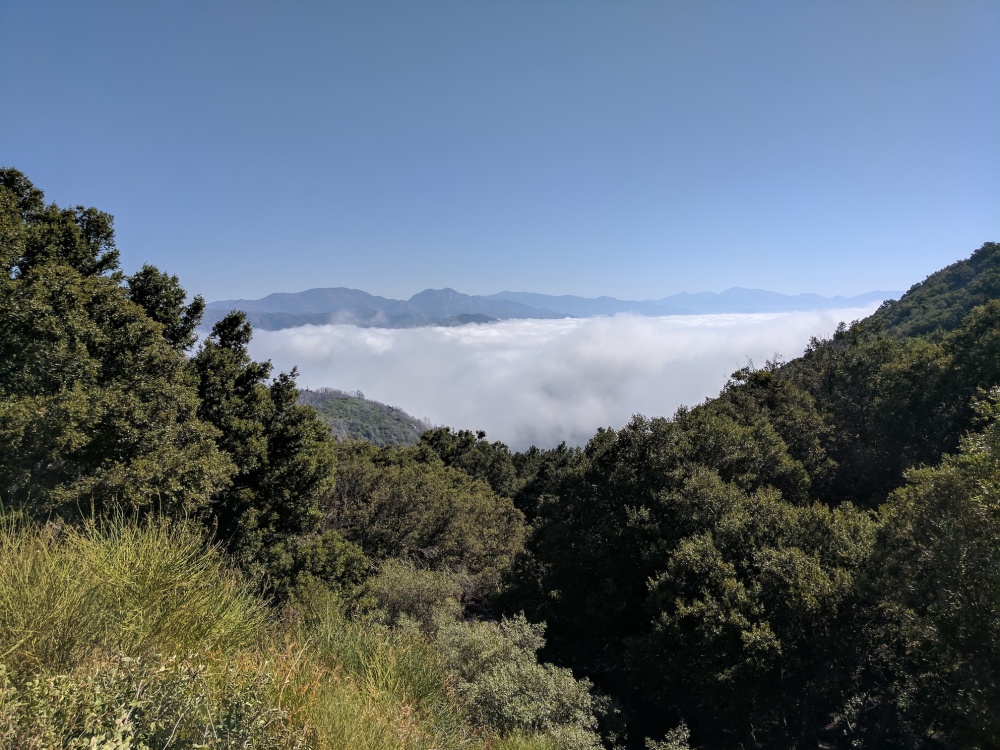 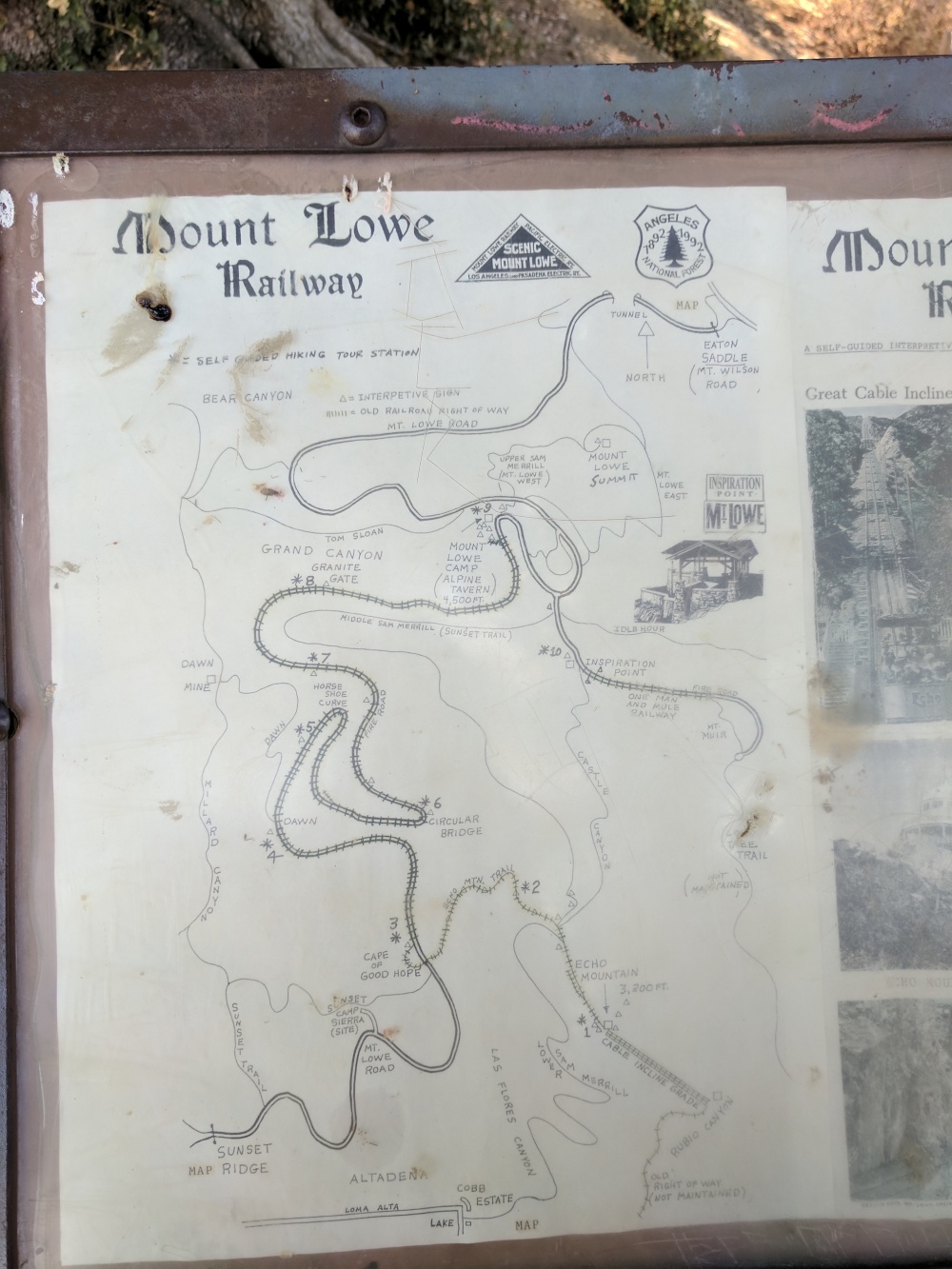 A foretaste of some of our route. 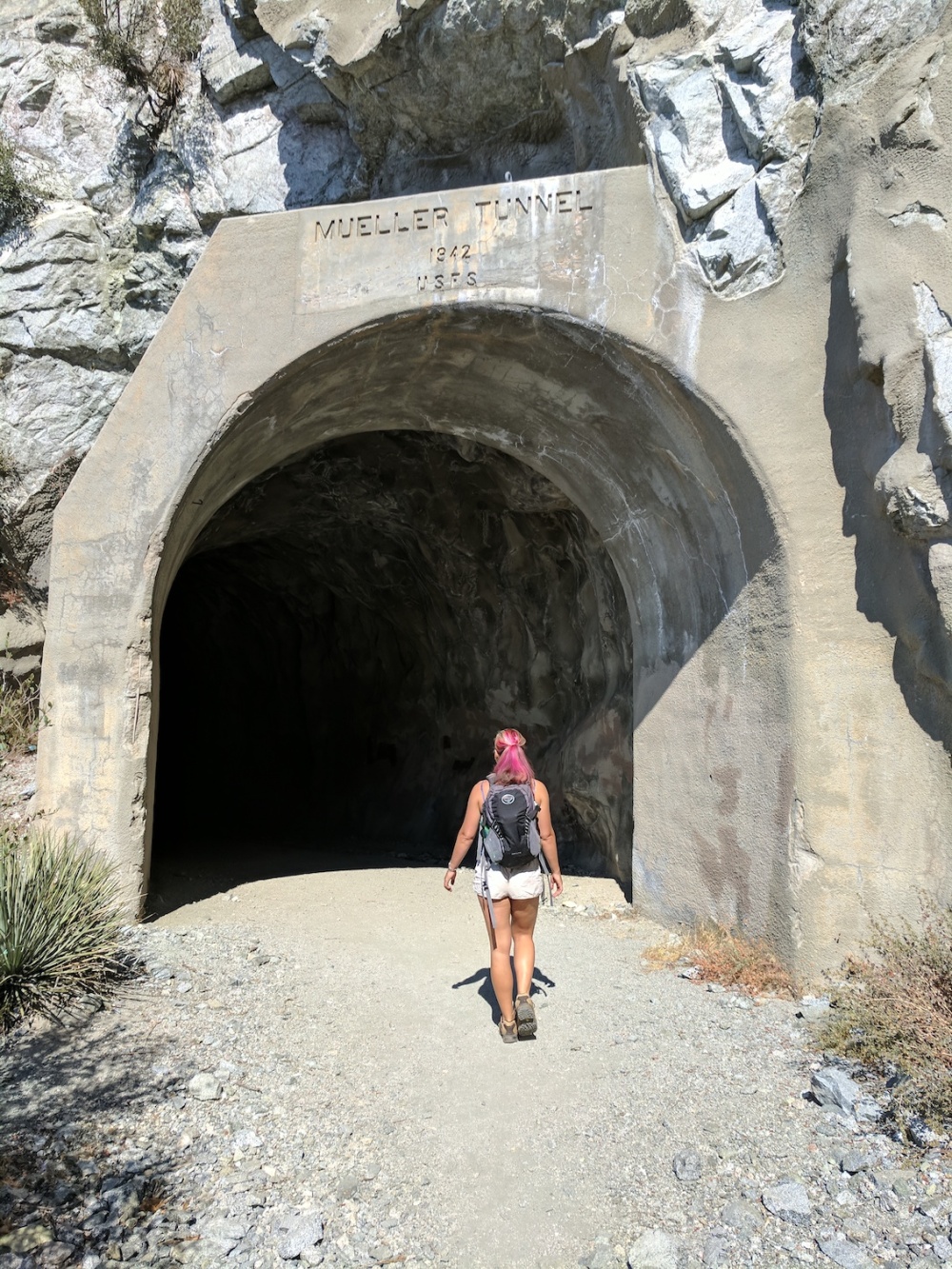 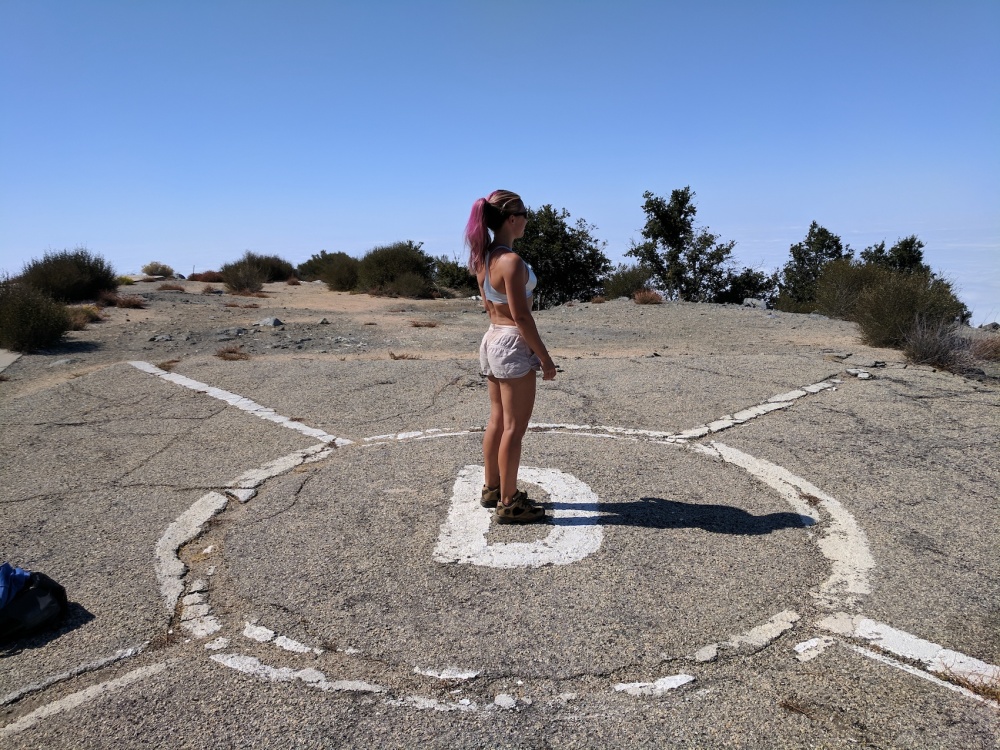 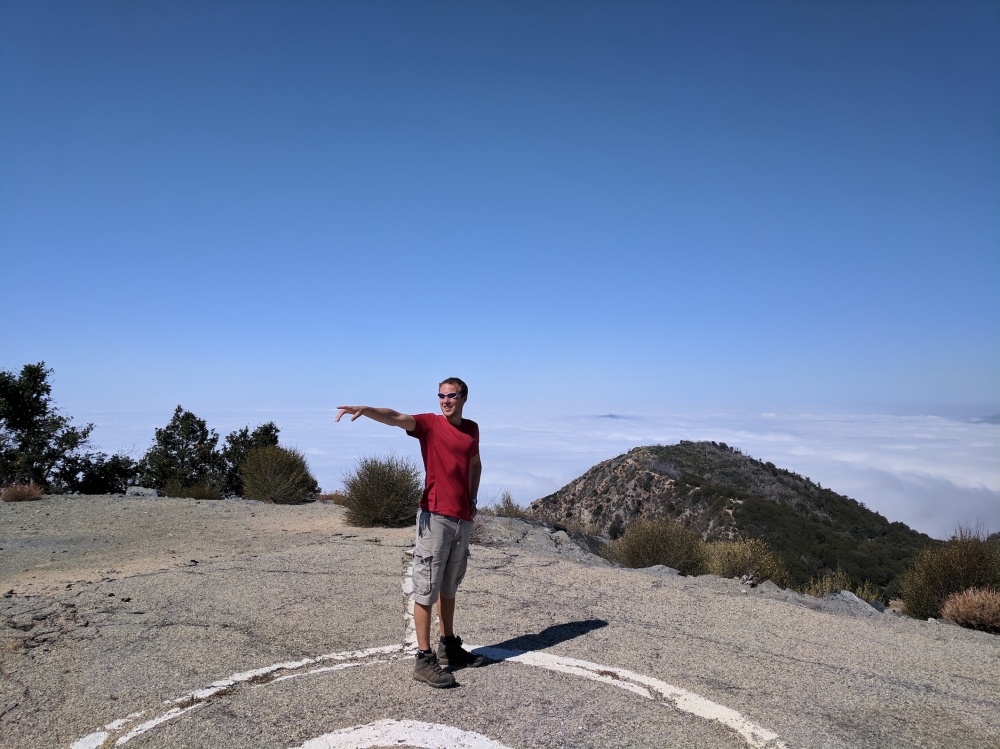 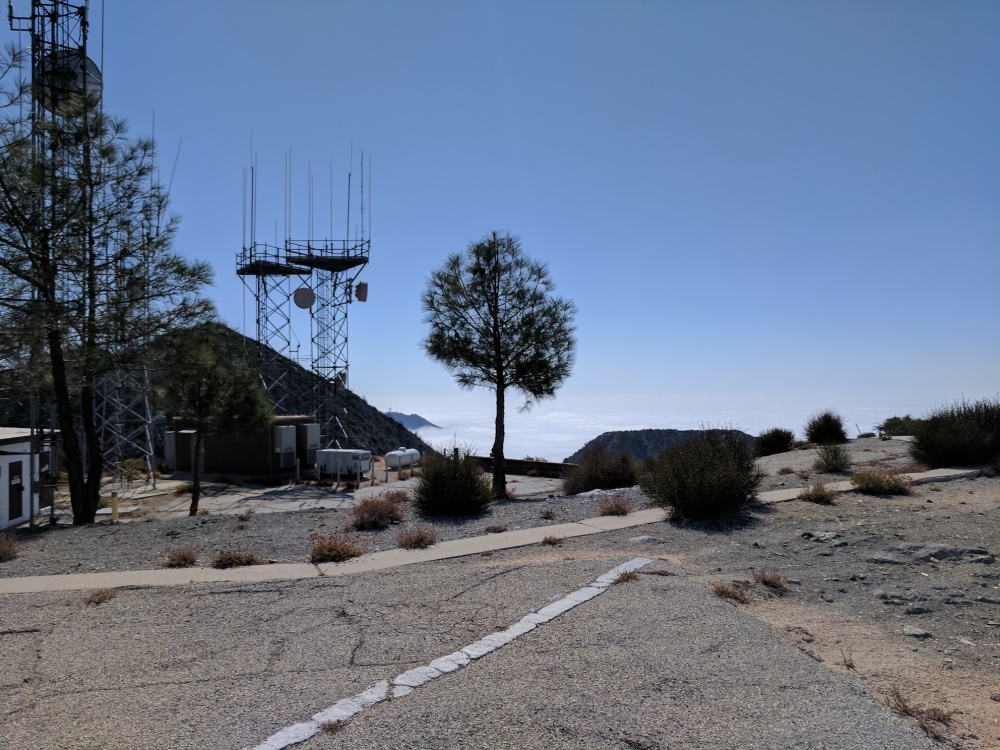 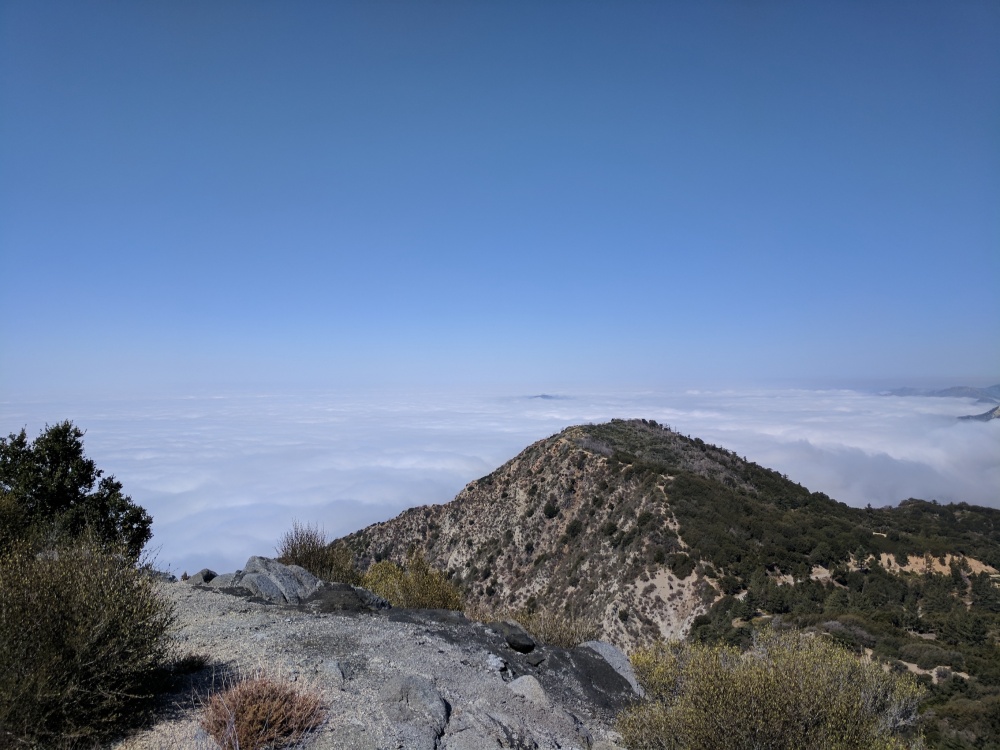 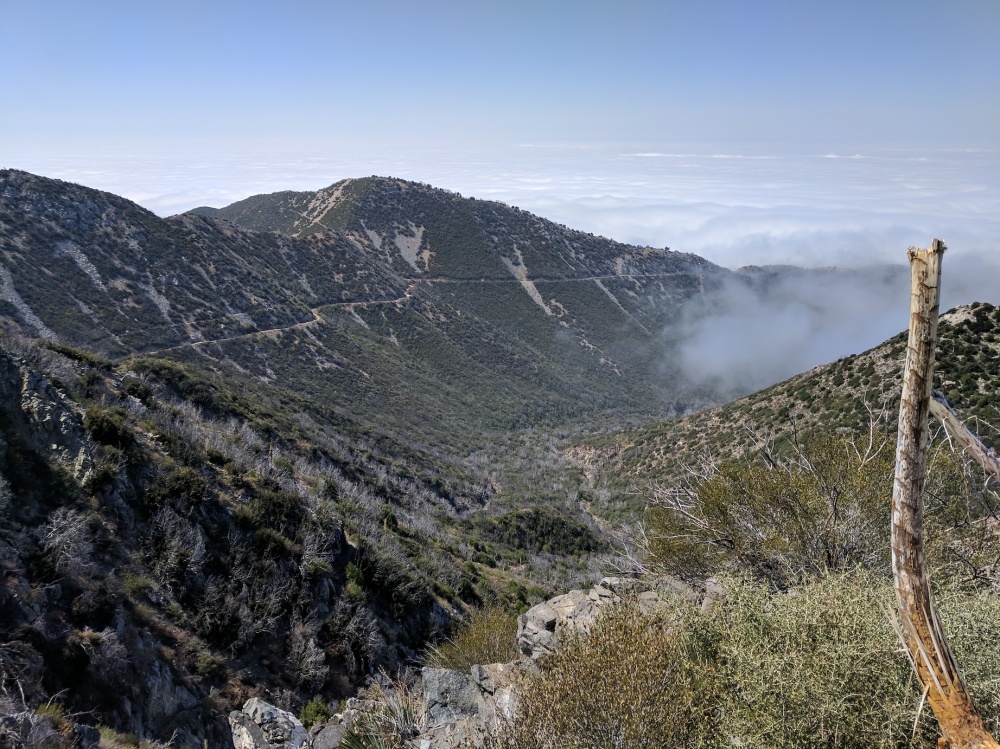 On the way up to our second peak. 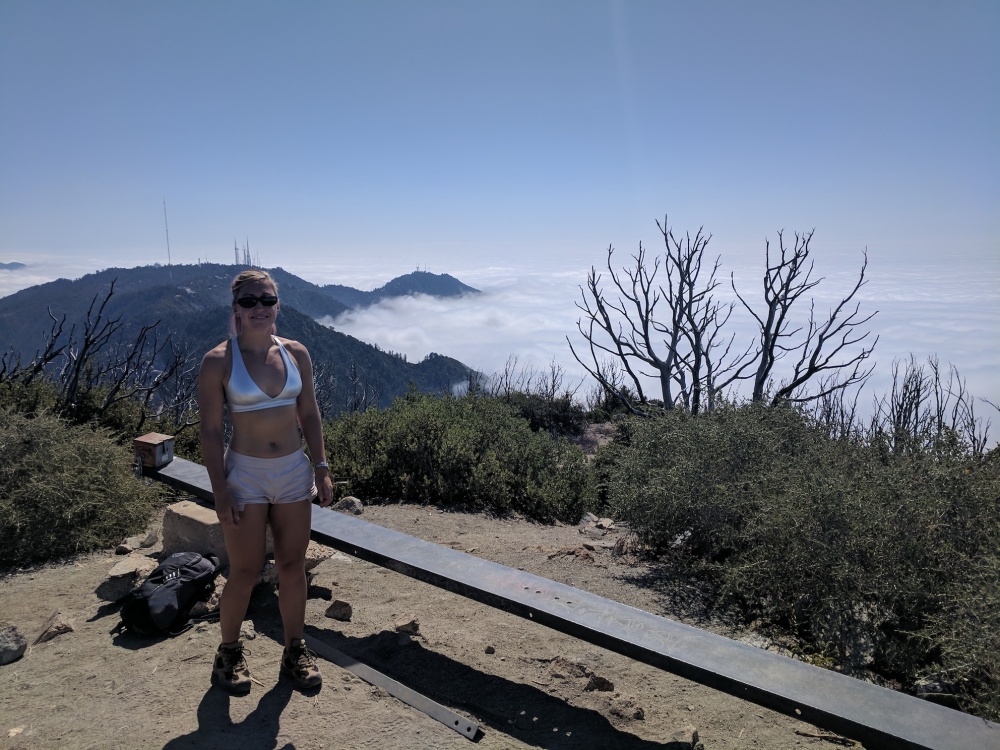 Wilson’s masts in the sea of cloud, about an hour and 20 minutes from the start. 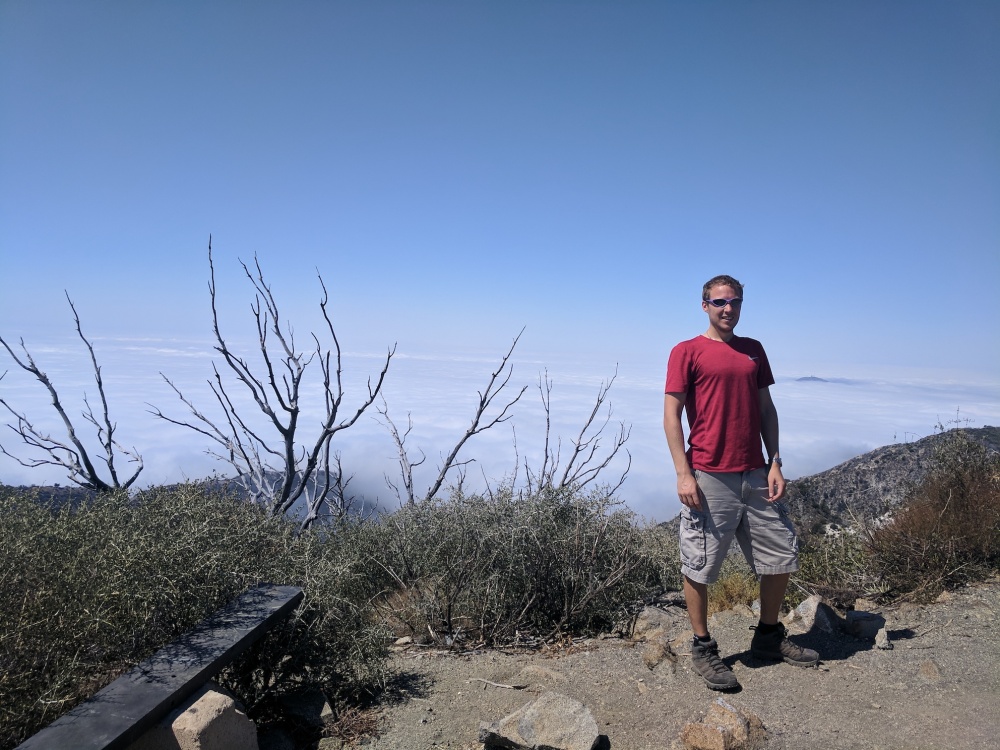 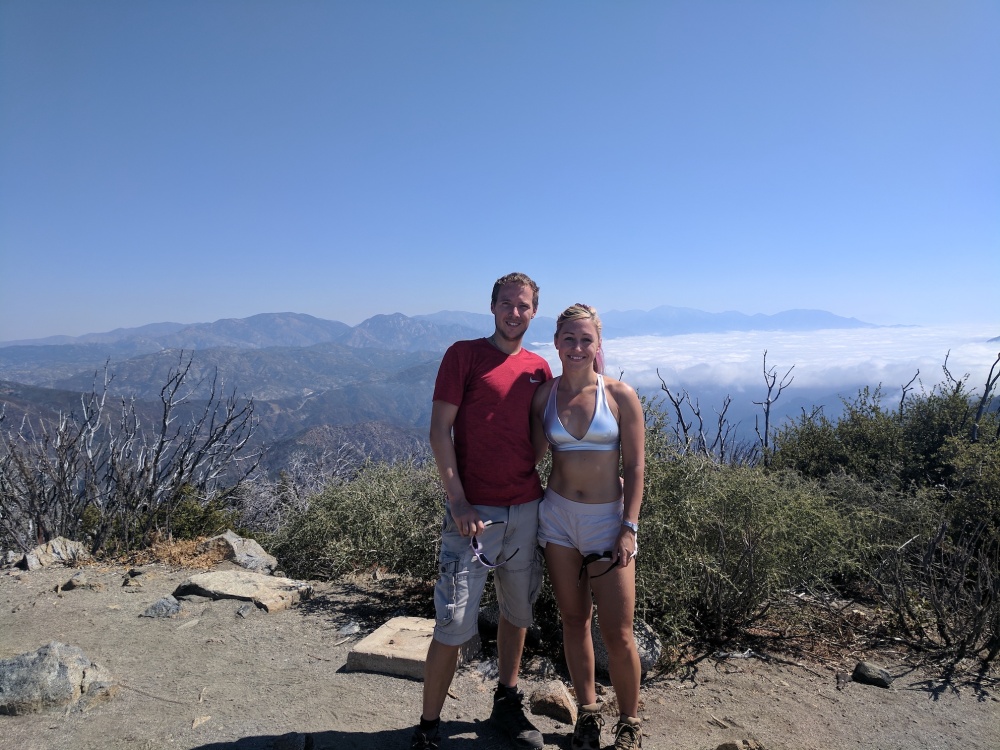 The front range as backdrop. 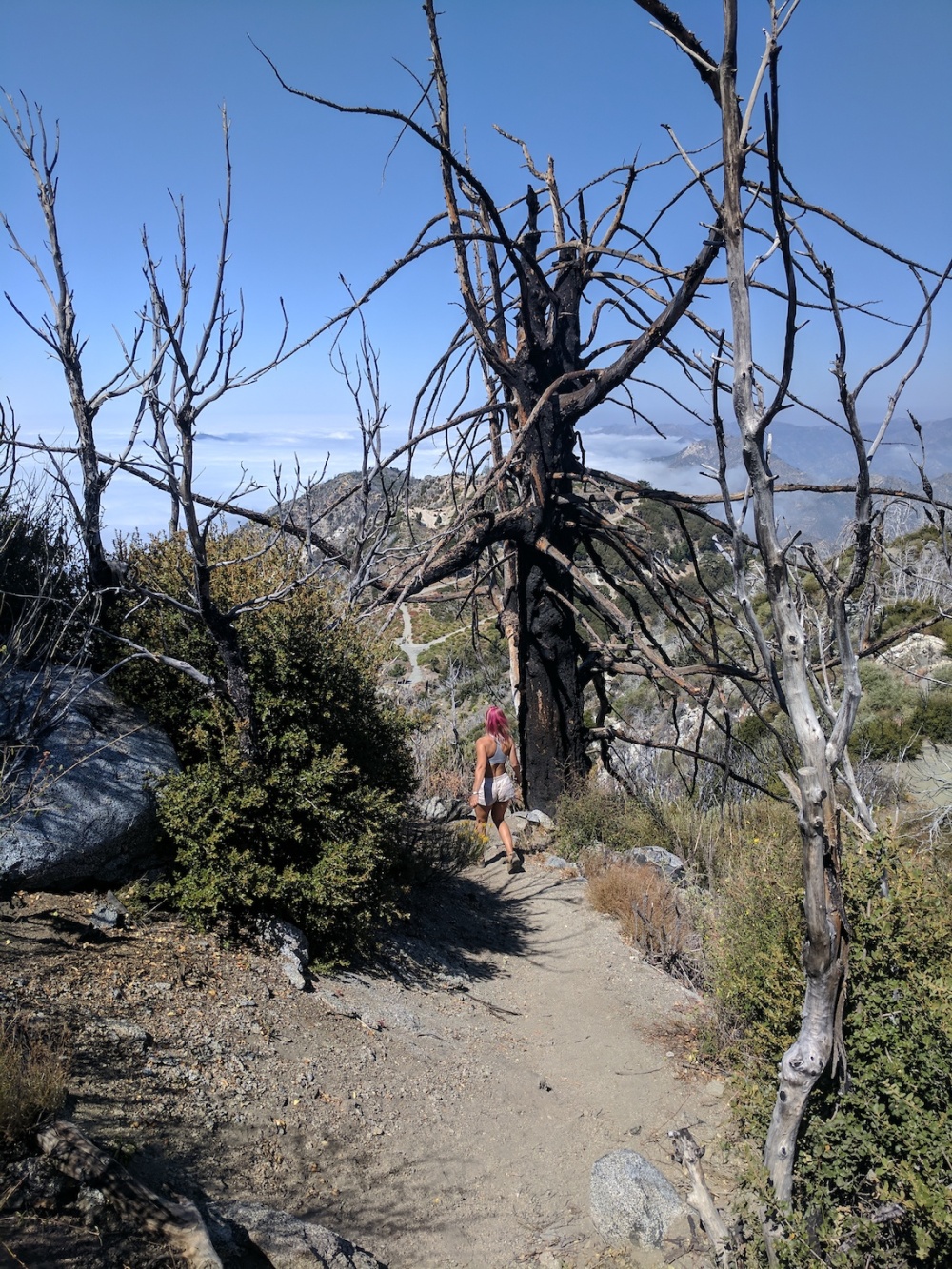 Back down to the Gabriel/Disappointment saddle for the third time. 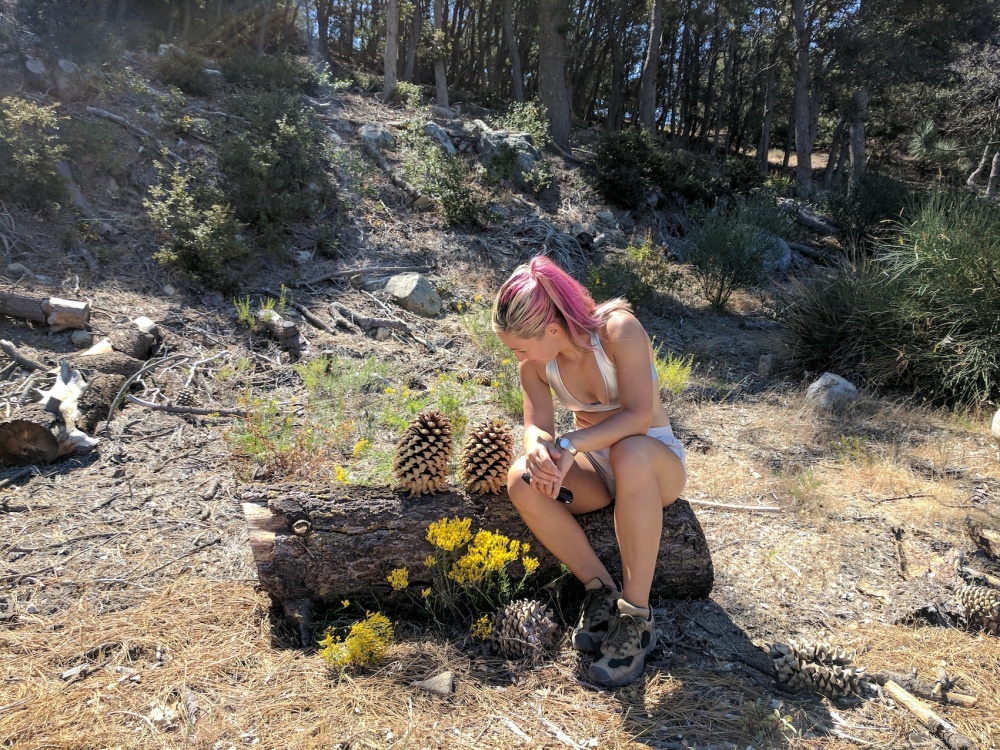 Somewhere off the road en route to Deception, stopping for a chat with some pinecones, for reasons that now escape me. 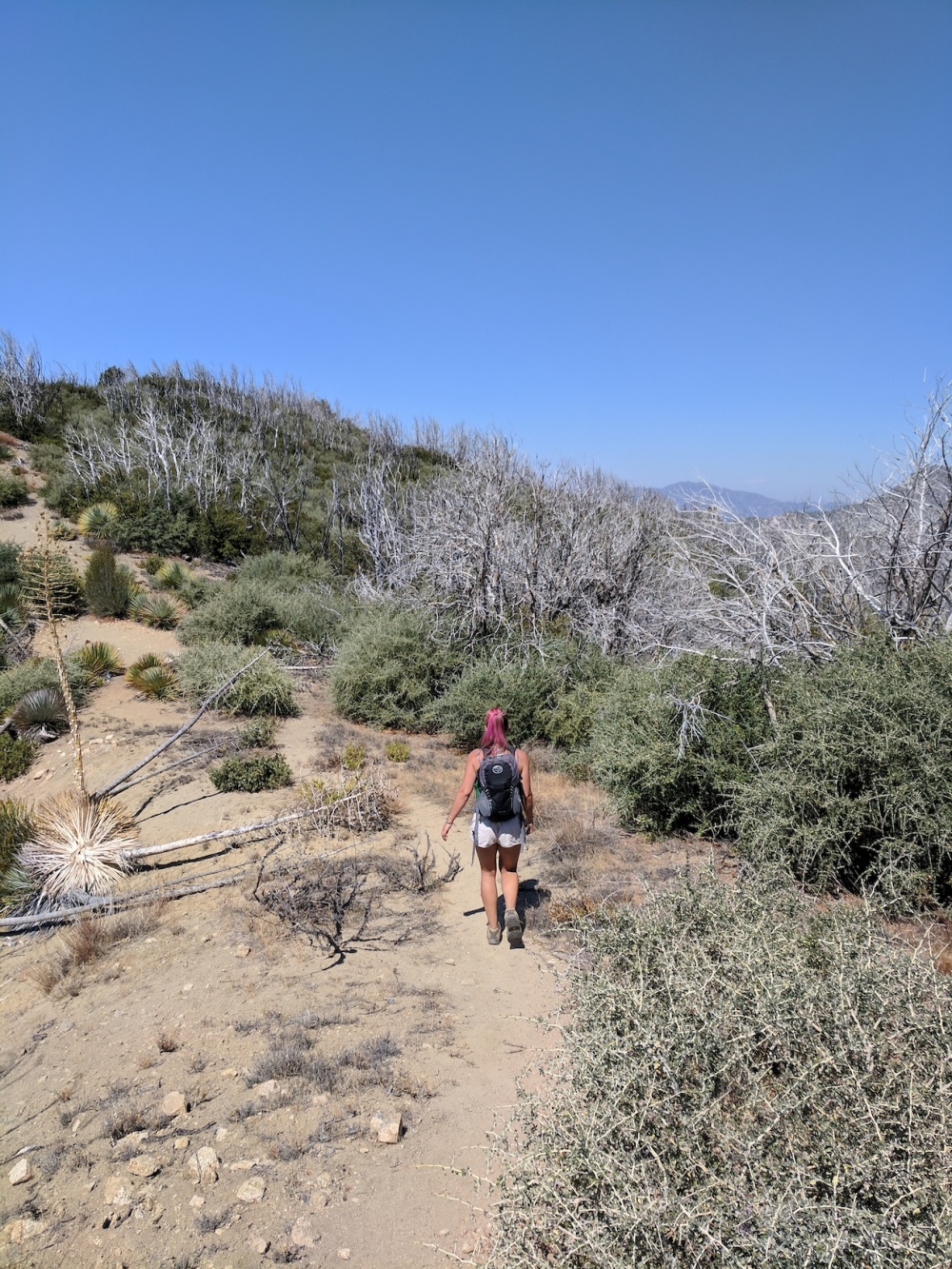 The path up to Deception, 2 hours from the start. 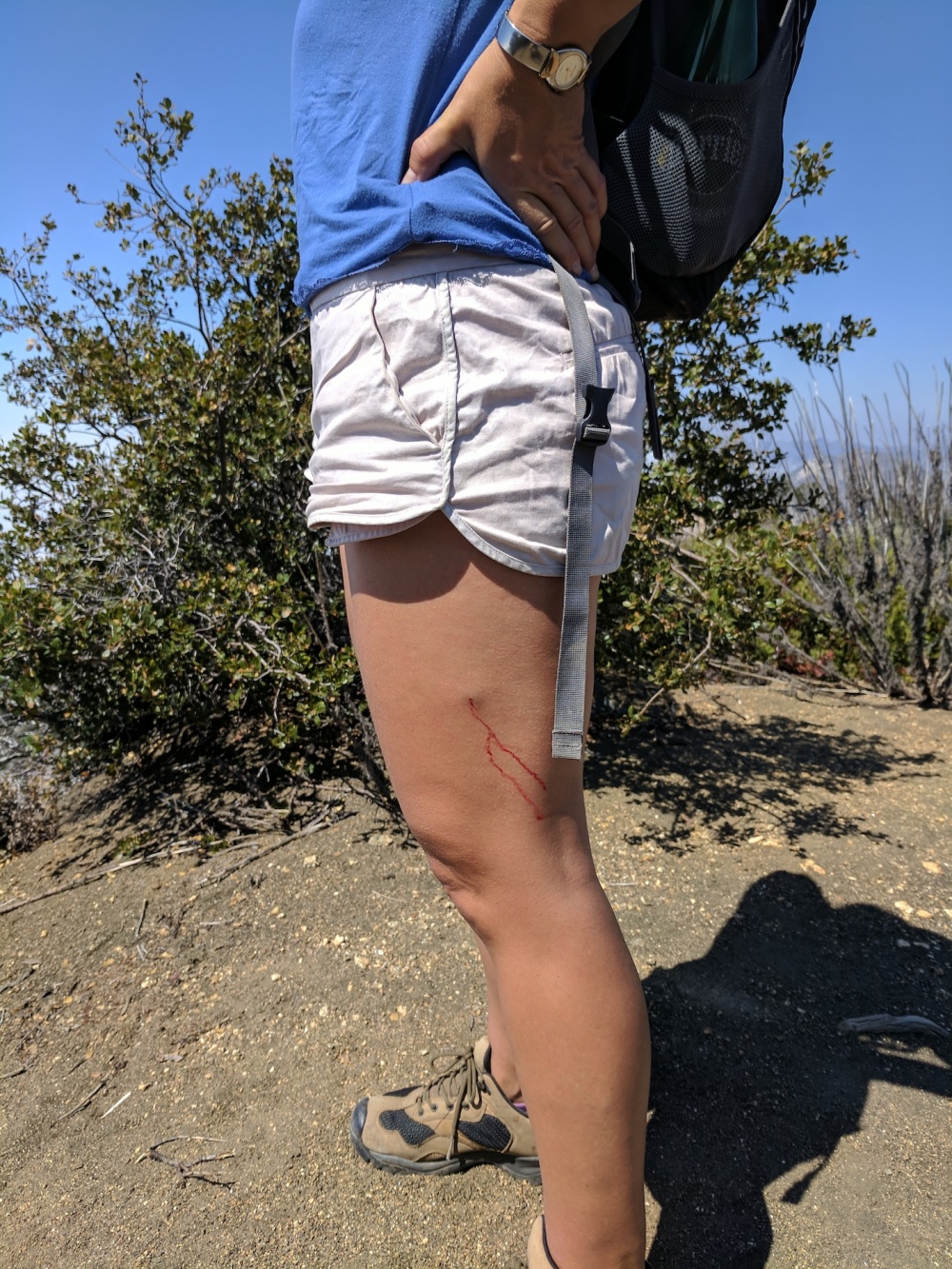 Nasty attack by a bayonet. 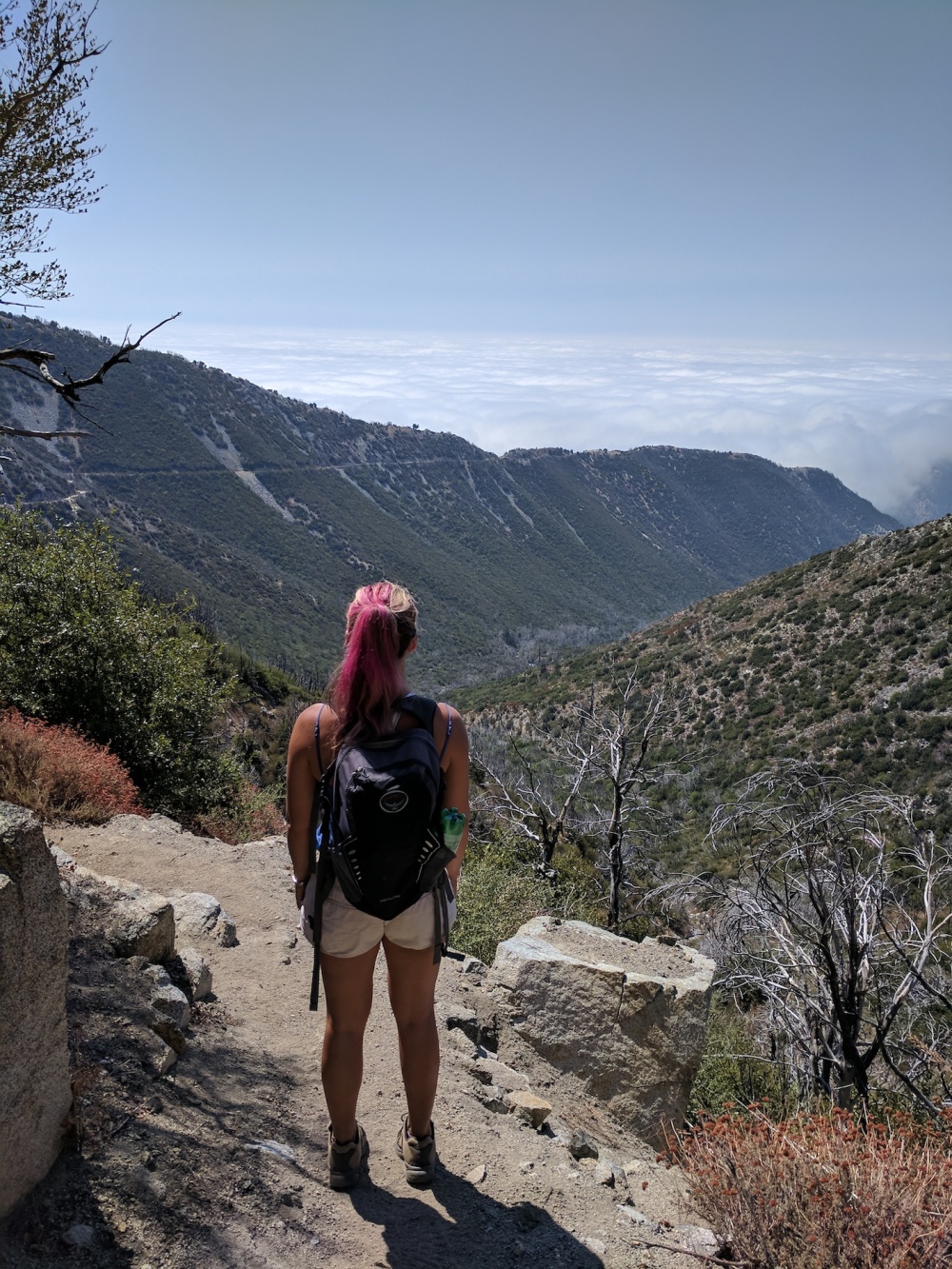 3 hours 20 from the car, heading back down the side of Gabriel towards Markham saddle. 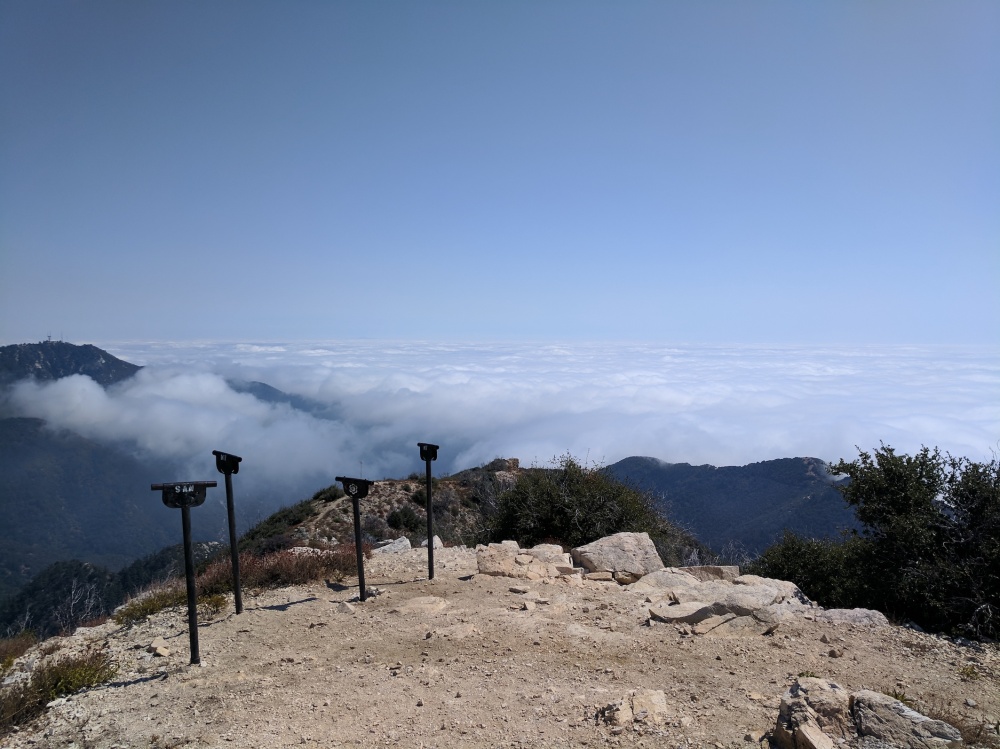 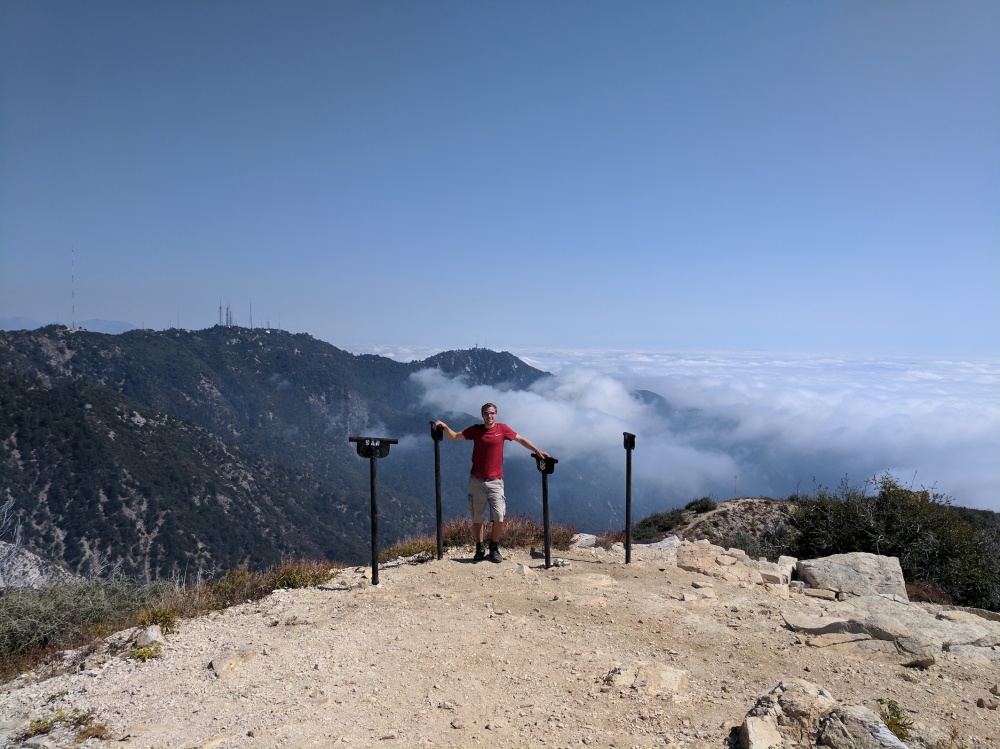 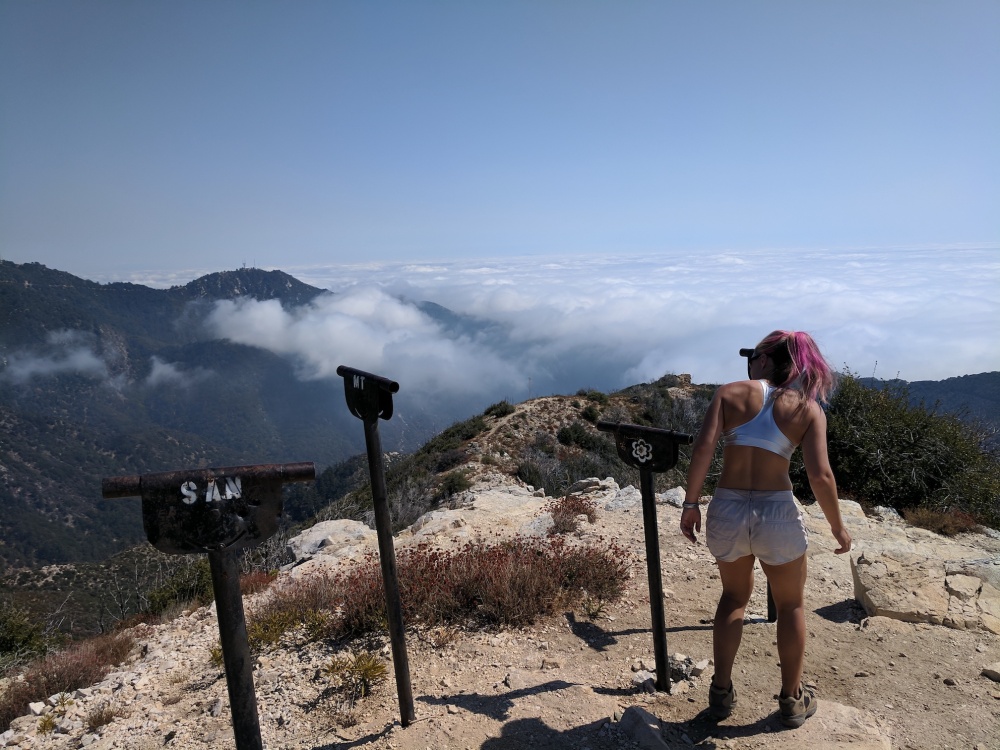 4 hours from the start, the viewing tubes of Mount Lowe. 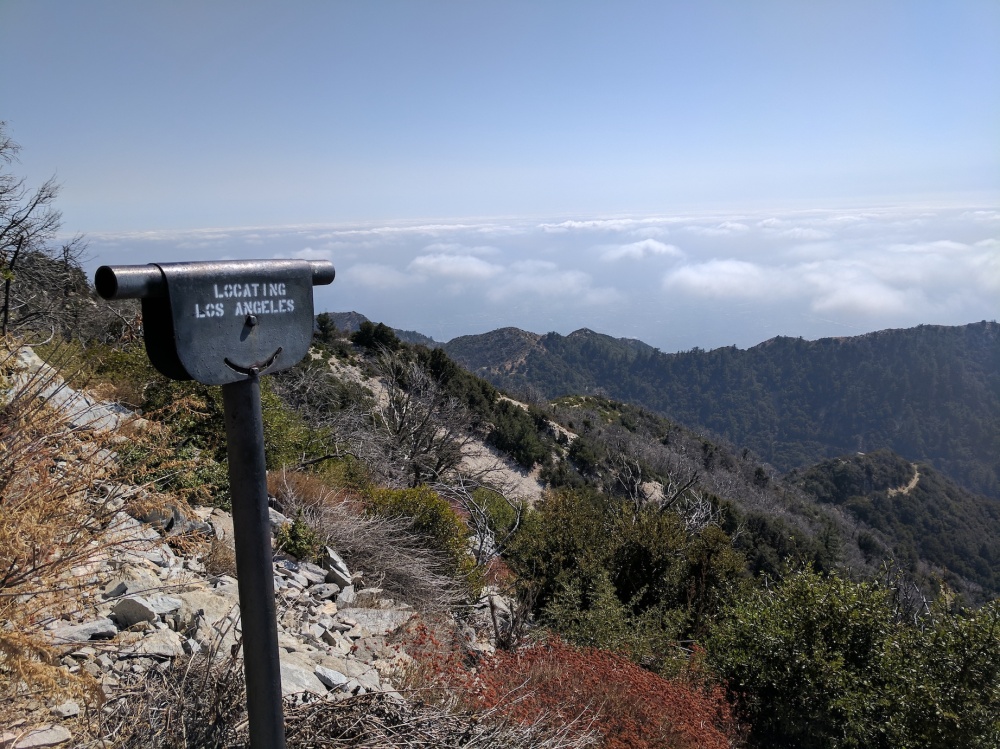 Another aspirational viewfinder on the way back down (4 hours 40 mins). 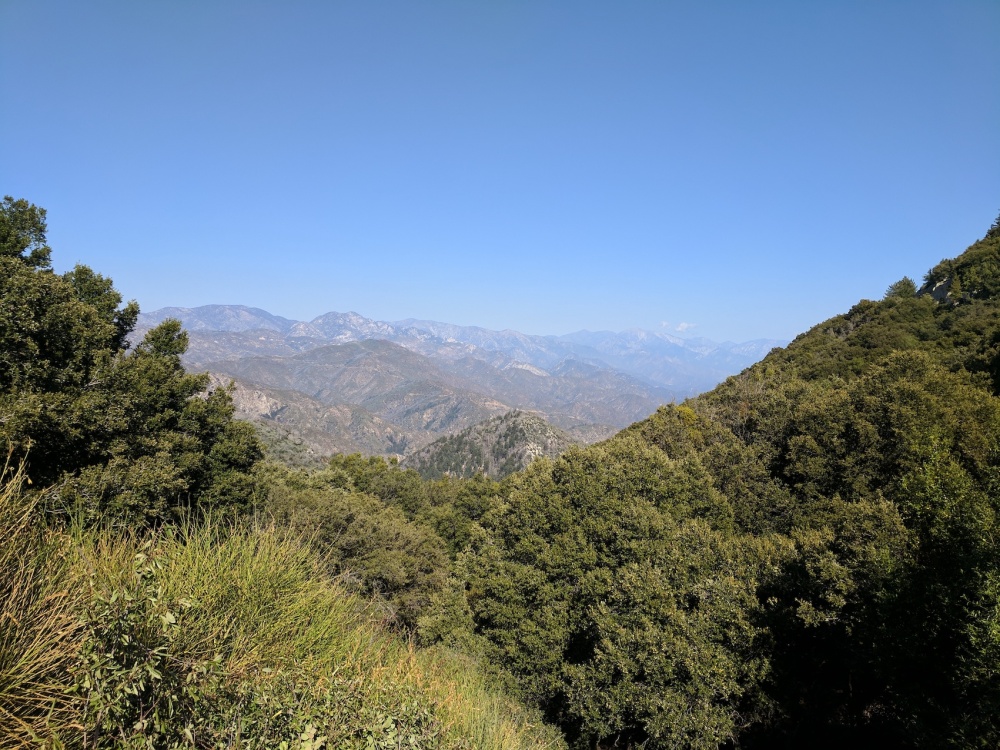 Back at the trailhead at 4 pm (6 hours after leaving it), the marine layer has all burnt off… 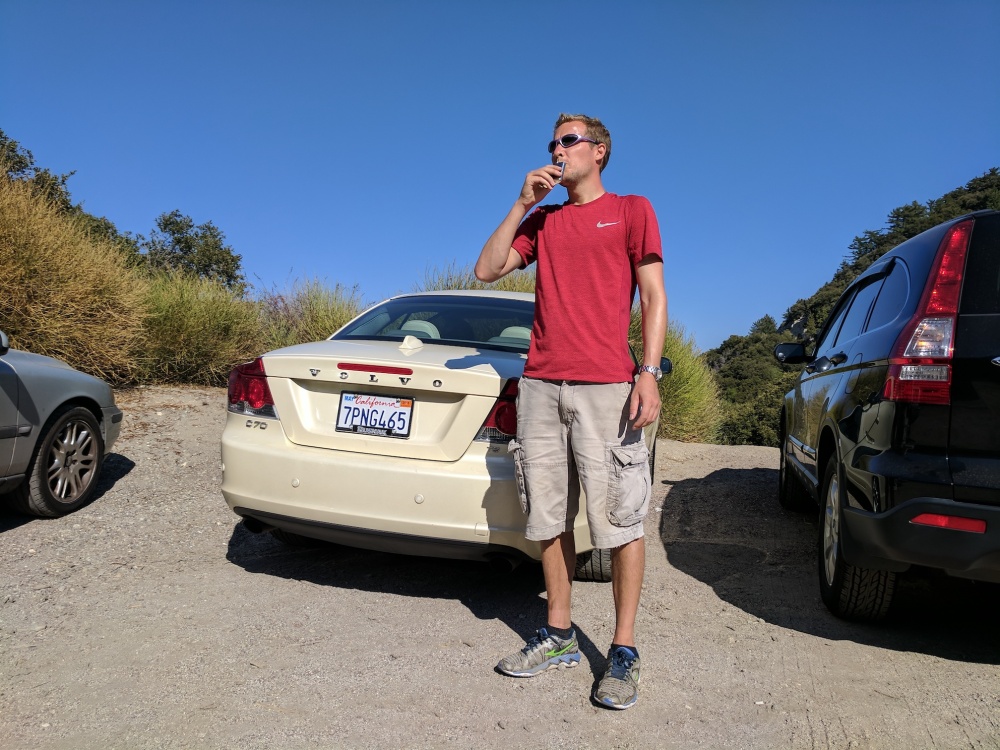 …and a snifter to mark the end of the walk. 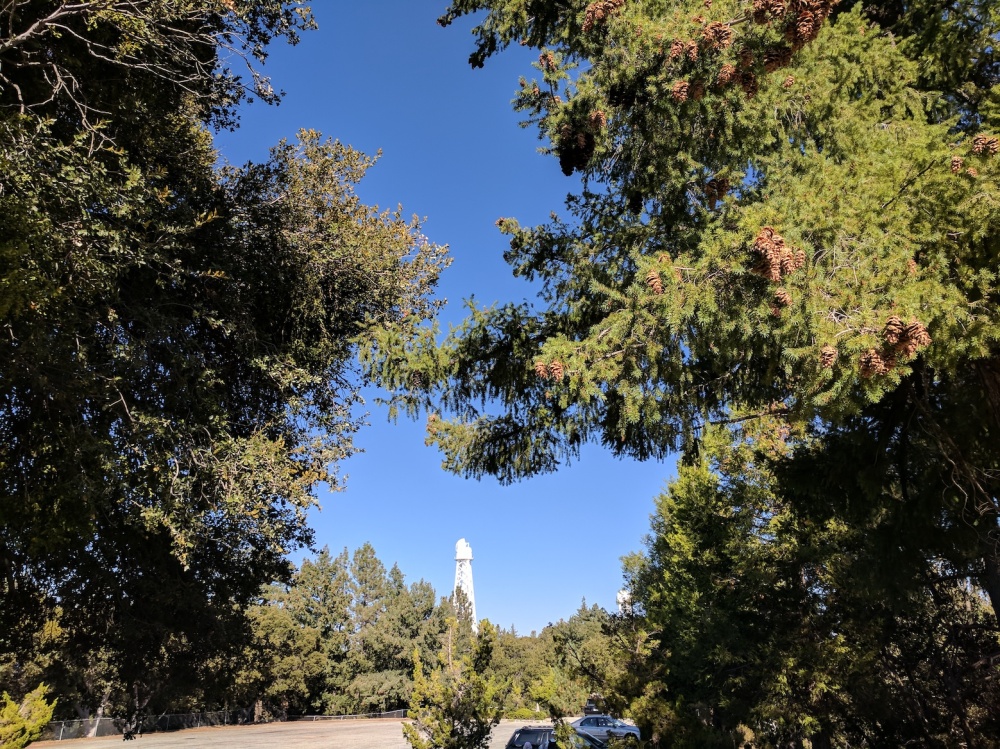 Finally, one of Wilson’s observatories in the afternoon sun.