Distance: about 12.7 miles round trip (or 14 to avoid the tunnels!)
Time: 7.5 hours, including a short lunch
Elevation gain: not sure
Difficulty: fitness-wise, difficult (just in terms of stamina!); terrain-wise, moderate; navigation-wise, moderate
Drive: 65 minutes (46 miles) from central Pasadena, north on the 210 and east on the 2 to Islip Saddle. Or alternative starting point for a shorter route that doesn’t require tunnel walking: an unnamed saddle 2.4 miles east of the old Kratka Ridge ski area and 1.5 miles west of Islip Saddle, near the highway mileage marker 62.50 (see photo below).
Trails of the Angeles hike no. 65

With an elevation of 8,214 feet and a location directly south of the Devil’s Punchbowl, Mount Williamson is a splendid spot from which to survey the desert and the San Andreas Fault. This stretch of Pleasant View Ridge, part of the Pleasant View Ridge Wilderness, lives up to its name in both pleasant views and wildness. Attempting to create a DIY circular route, we also made this hike rather longer and more exciting than it should have been by failing to read the book properly, and starting in the wrong place.  Oh well. Our version is pretty similar to two other versions that would be preferable…

To do what we did — from Islip Saddle, follow the sign for the Pacific Crest Trail setting off northwest from the carpark, to the left of the picnic table (ignoring the one for the South Fork Trail to the right of it). With a big bulge of rock instantly between you and the 2, this route is beautiful and secluded from the very beginning, with views of Mount Islip to the southeast and Baden-Powell further east, and enough pines to be atmospheric without spoiling the views. Approaching the summit of Williamson up the south slope, the path gets rockier, and the southerly views down the San Gabriel Canyon are stunning. You get to the summit spur trail at around 1.7 miles, and then the ascent gets a bit steeper up towards the bald summit at around 2.2 miles, with Pleasant View Ridge opening up invitingly to the northwest. Baden-Powell and Baldy look even better from up here, and the Antelope Valley desert below is a dramatic foil to the forested mountain slopes.

Then head back the junction with the main trail and continue northwest along the Ridge trail. There’s quite a lot of up and down on this 2.8-mile stretch to Burkhart Saddle, some of it distinctly unsolid underfoot. Pallet Mountain is, as the name implies, a big flat expanse, but decorated with a great carpet of pinecones. From there, you descend to the Saddle (see here for a route that approaches the saddle from the Devil’s Punchbowl territory to the north).

From the saddle, turn south on the Burkhart trail (unless you want a steep extra ascent up Will Thrall peak), and descend into trees. After 1.7 miles heading roughly south (with a few kinks), you get to a stream crossing where we stopped for a more-thirsty-than-hungry picnic. Then it’s another 1.3 miles to the junction with the PCT. Take a left here, and enjoy passing through some pretty cool rock formations as the trail gradually approaches the Angeles Crest Highway to the south. It’s 1.8 miles to a crossing of Little Rock Creek, and then the final section of the route (half a mile) is a wider forest road that leads back up to the 2, meeting it at Eagle’s Roost.

This was where we realised that we’d messed up, and that the car was either 2.5 miles up the 2, including through two tunnels, or 3.7ish miles along the eastbound PCT including an ascent to meet the trail we’d started out on from Islip saddle. The latter would be a nice way to create a full-day route, but we were tired and a bit dehydrated (I’d even resorted to eating a very big apple!), so we decided the road was the lesser evil. James found some abandoned bits of reflective stuff for us to hold up as protection in the tunnels, but in the end we met no cars, and we enjoyed the swiftness of road walking for the final stretch. We passed the parking place where the car should have been (1.5 miles west of Islip Saddle, see photo below), to approach Williamson on the PCT from the southwest not the southeast. Maybe we’ll come back and do it right one day, or else do the longer version we could have done if we’d had a bit more water and spring in our steps.

Lovely vistas from 15 minutes in. 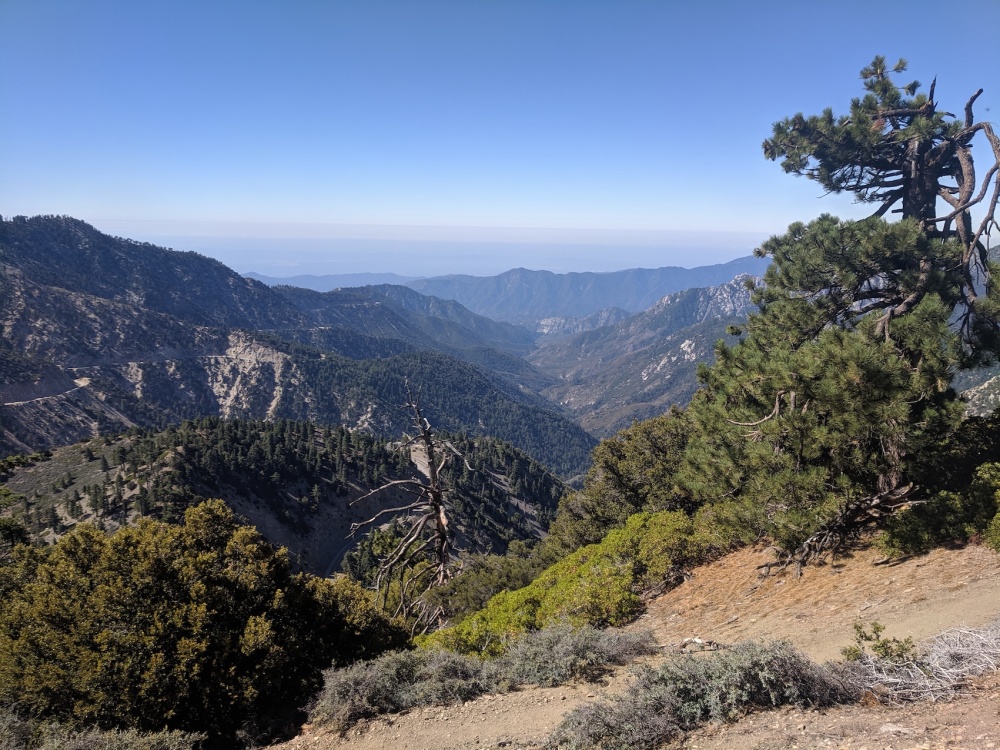 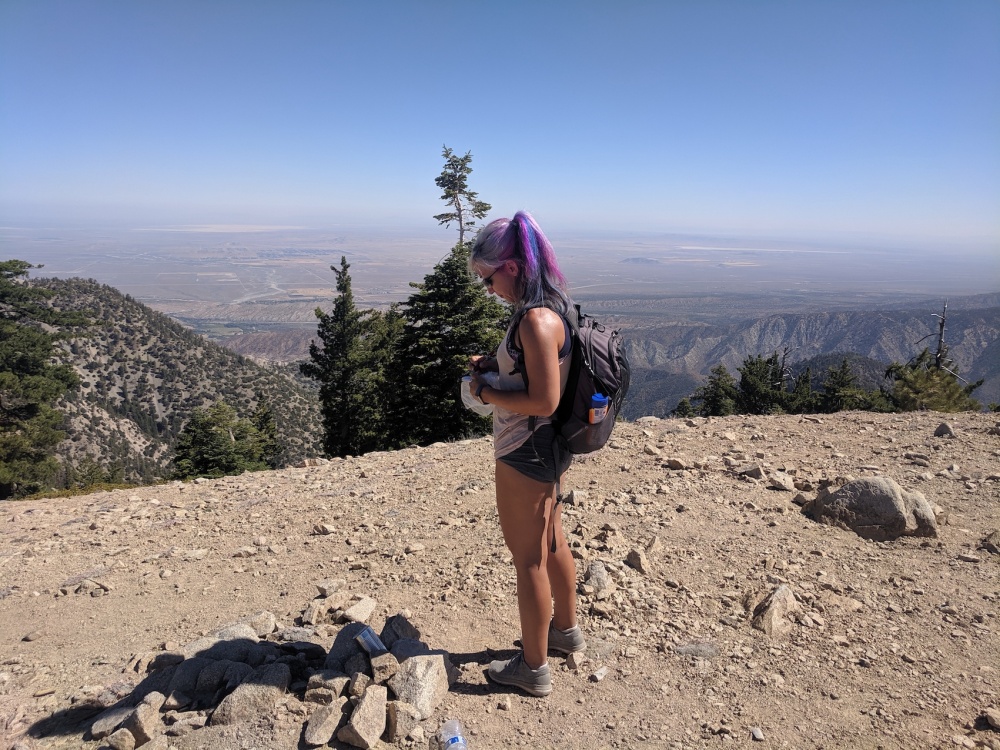 Adding ourselves to Williamson’s visitor book (1 hour from the start).

Striking off along Pleasant View.

The most treacherous of the undulations (about half an hour from Williamson). 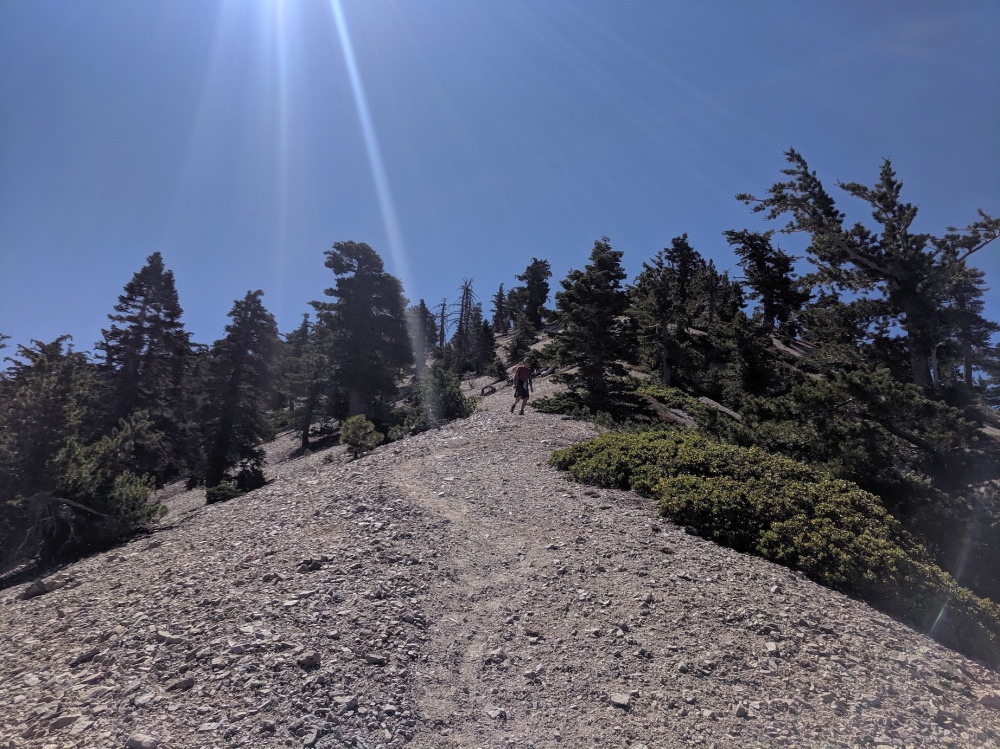 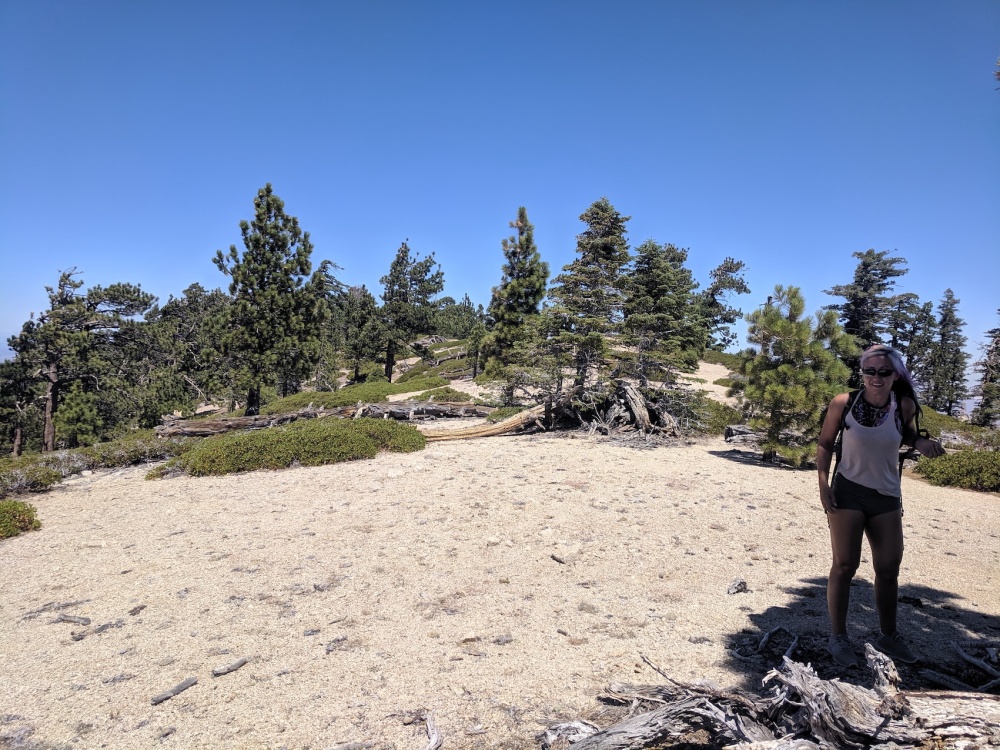 Pallet Mountain, 2.5 hours from Islip: time for a drink and some chocolate. 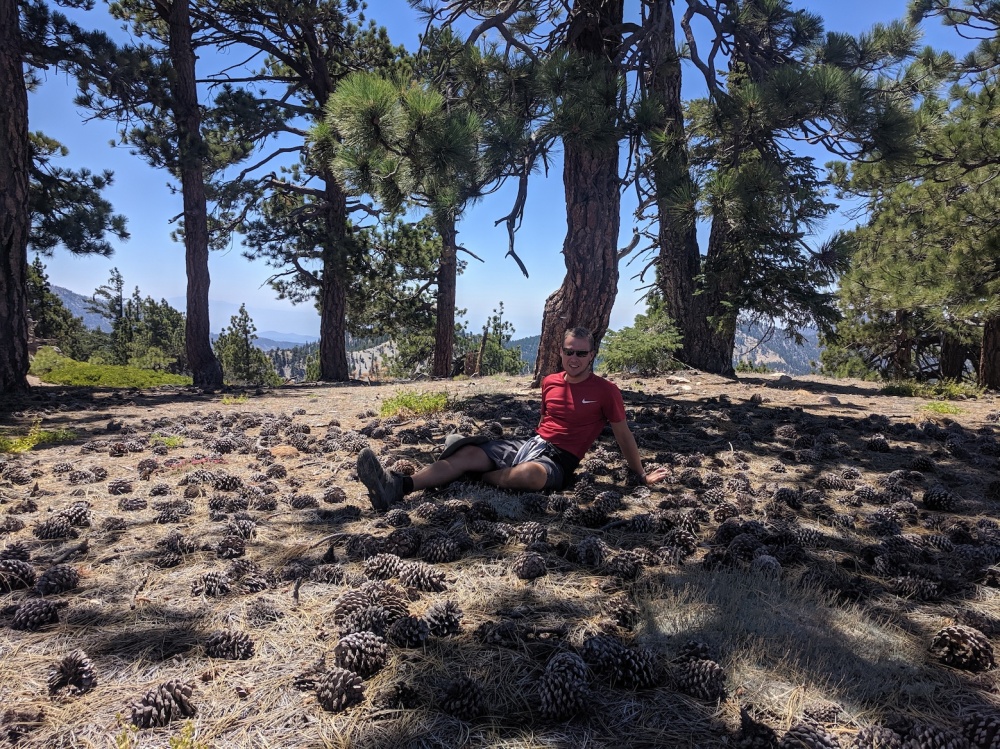 Pallet Mountain turns out to be pinecone central. (James plays in a baseball team called the Fighting Pinecones, which has yielded the superlative email opening, “Well cones,” so these photos were obligatory.) 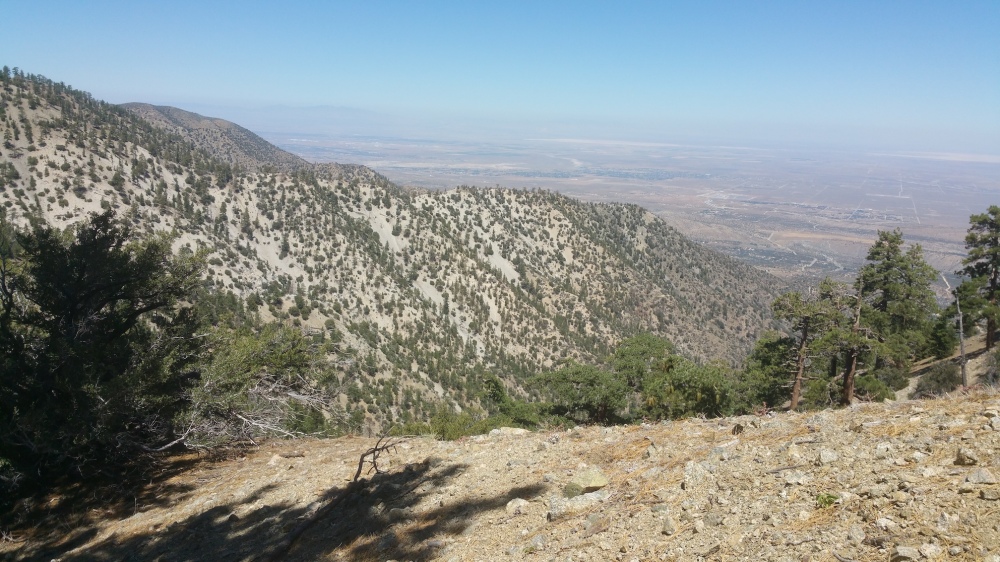 Another half hour, and here’s the ridge along which the northern stretch of the Burkhart trail ascends from the Punchbowl (see our hike here).

The descent to Burkhart Saddle (not quite as bad as it looks).

The saddle! (3 hours from the start.)

Setting off south down the Burkhart trail. 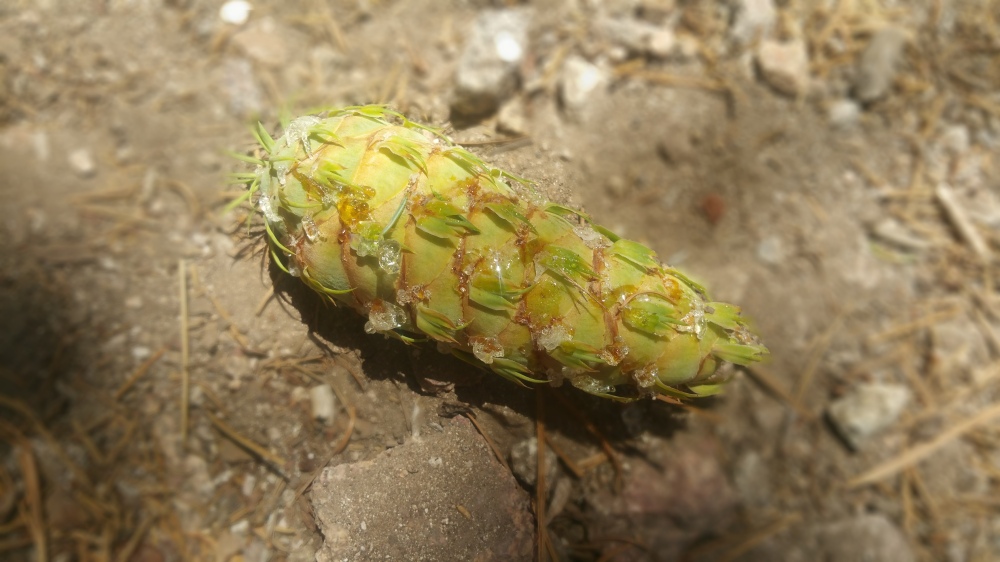 The PCT winds its way east…

20 minutes from the road. (At this point James had very little faith that we were on the right track. I had near-total confidence, and was of course proven right.)

My vindication. (6 hours 45 minutes from the start.)

Nice views from the verge of the PCH.

The lay-by we should have parked in (with the PCT heading up towards Williamson in the corner). 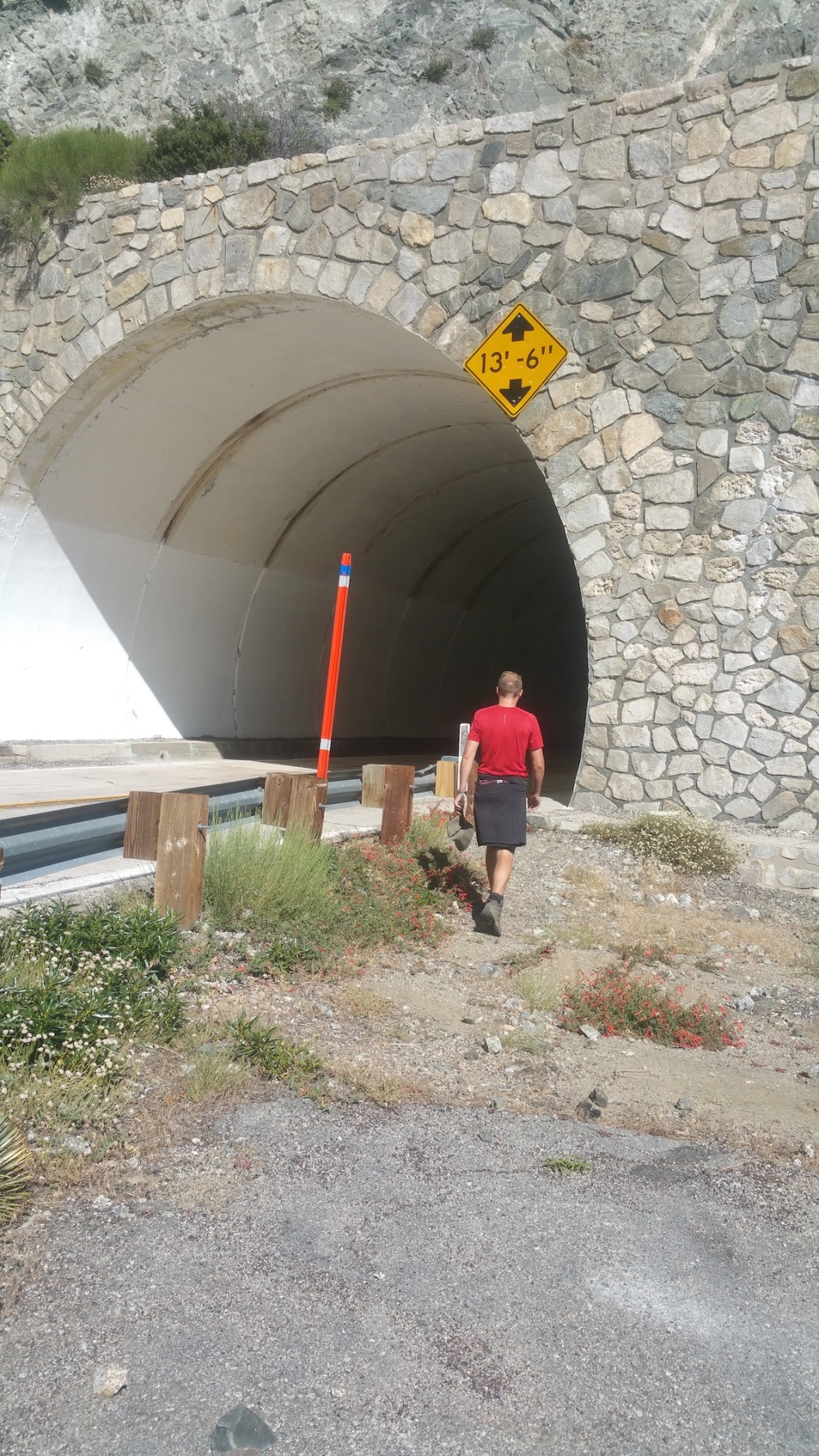 A reward: poppies in between the two tunnels, unbothered by anyone.