Distance: 7.5 miles (12.1 km)
Time: 2 hours 50 including a short stop at the top
Elevation gain: 2,000 feet (610 metres)
Difficulty: terrain-wise, easy until the last half mile, then moderate; navigation-wise, easy; fitness-wise, easy until the last half mile, then very difficult
Drive: 45 minutes (33 miles) from old town Pasadena, east on the 210 and north on the 39 to Smith Mountain Trailhead
Trails of the Angeles hike no. 73
Modern Hiker has an account here, and hikespeak one here

We started this walk rather closer to sunset than was optimal, but navigationally it’s dead simple: take the trail that starts at the roadside hut, and follow it 3 miles (4.8 km) to Smith Saddle, then tackle the steepest half mile we’ve ever done, rock-scrambling and thorn-dodging 800 feet (244 metres) up to a sneaky false summit and then the real one. About a mile from the start you get your first view of the saddle before the steep section, and the dramatically precipitous summit comes enticingly in and out of view over the 3 miles.

The 360º sunset views over the San Gabriel Wilderness to the west and the dramatic Twin Peaks Ridge and Waterman Mountain to the northwest were spectacular, though we were disappointed, given the Ridge is apparently ‘one of the last citadels of bighorn sheep in this range’, not to catch any glimpses of sheeplike creatures to keep James’s Welshness happy. 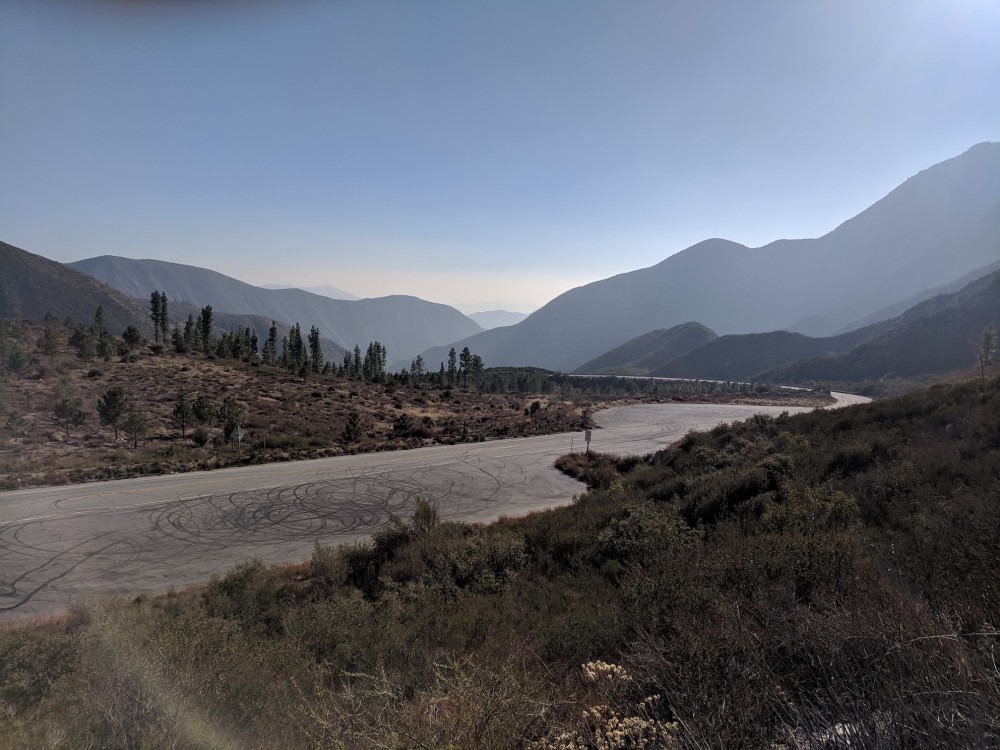 The view south from the very start of the trail

An early sighting of Smith

…and treats us to a rare topless moment

Views open up back down the North Fork valley, with Mount Baldy in the distance (the top left spike)

Looking west from Smith Saddle over Bear Creek into the Wilderness 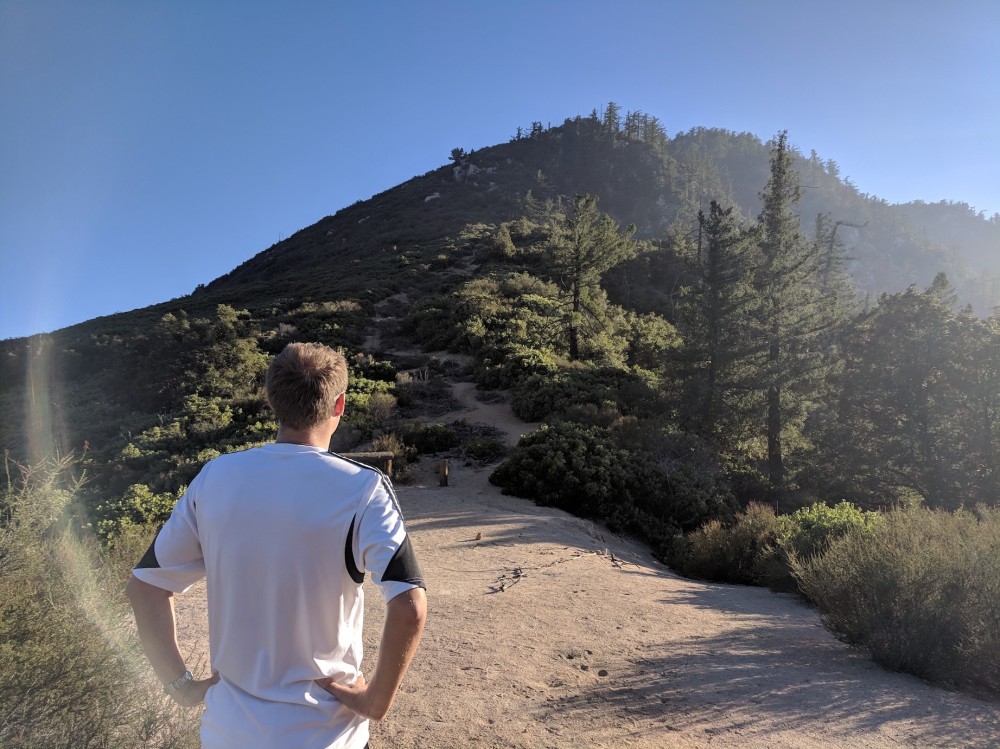 …and setting off full of false confidence

Looking back towards Mount Islip from halfway up 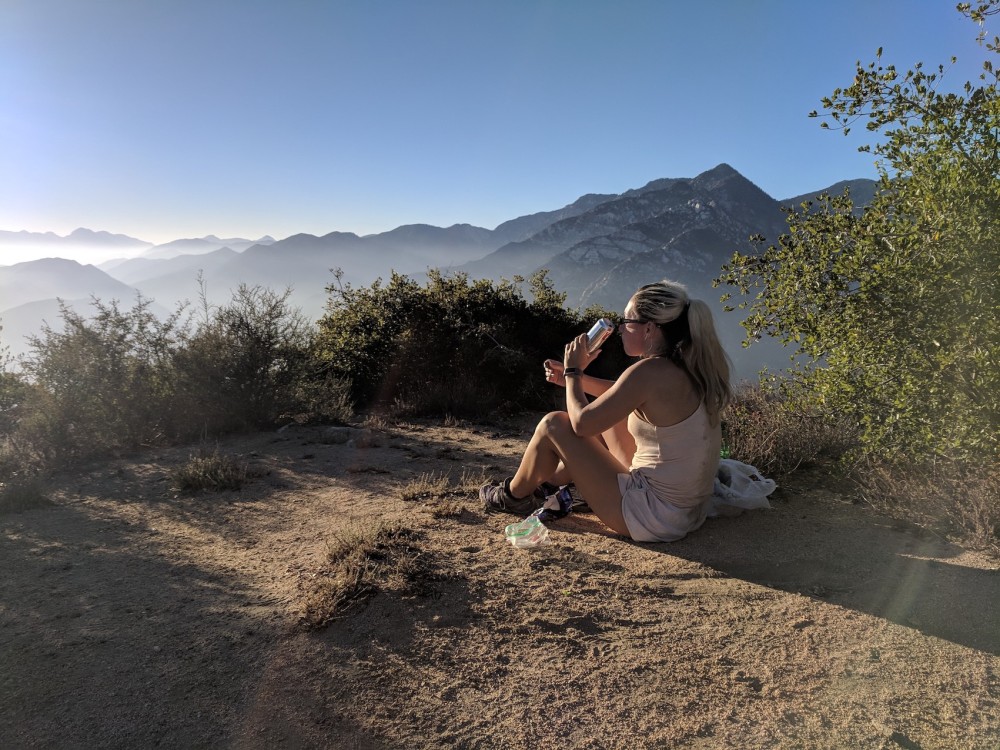 Victory: nearly too chilly for Coors, but not quite 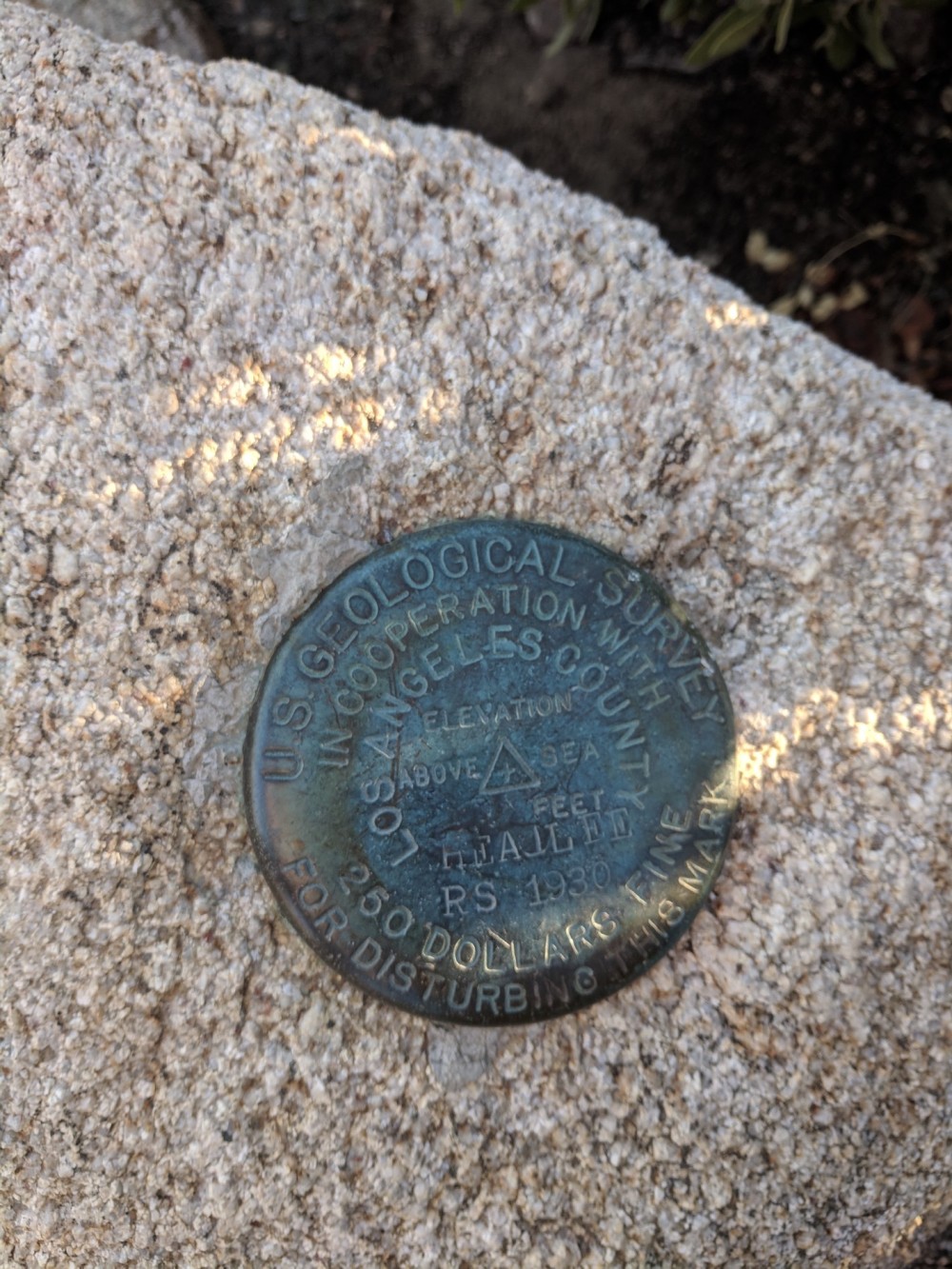 A helpful badge with the only conceivable interesting information (5,111 feet above sea level) strangely absent, and using the mountain’s former name, Headlee 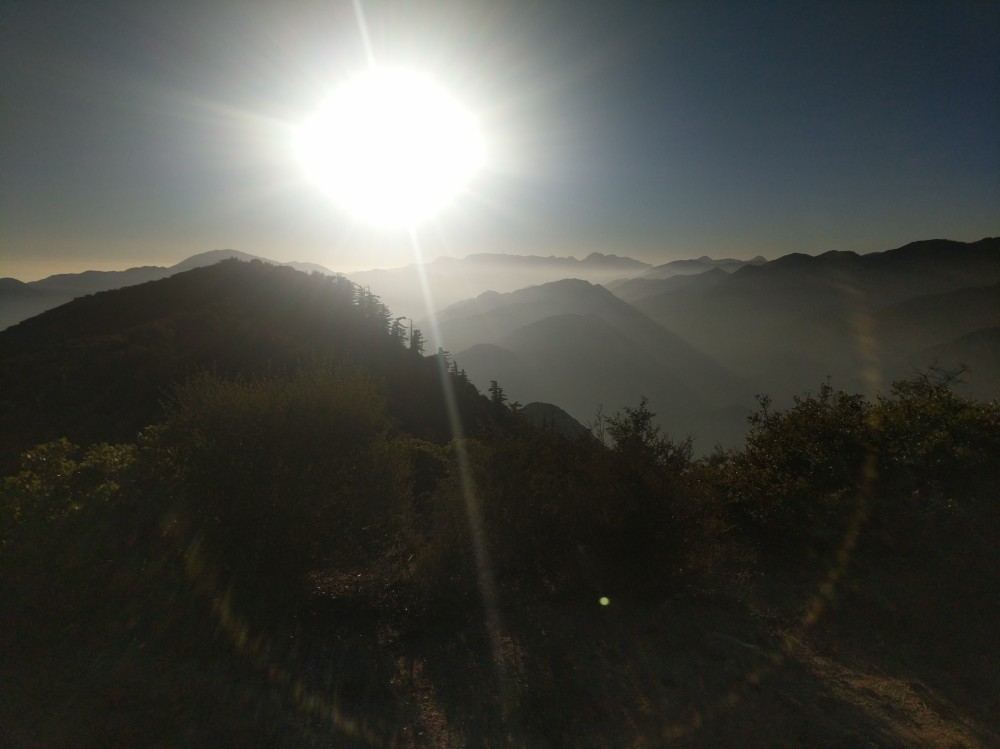 …and the southerly haze

…and the obligatory panoramic.

We ventured up here again on 11 February with a lot of snow still on the ground. From the saddle the climb up to the summit would have been impossible and/or stupid without more/any gear, so instead we turned north and scrambled up the firebreak for half a mile or so. There were a couple of slightly hairy steep slippy parts, but we got as far as a nice snowy plateau with a handy log or two for lunching on.

We also spent about 15 minutes of exploring the Bear Creek trail that continues on west from the saddle, into the eastern fringes of the San Gabriel Wilderness. It looked lovely, but there were quite soon some snowy patches narrow and slippery enough not to want to continue.

These bits and pieces took the total distance to 7.5 miles / 12 km, and the elevation gain to around 2,460 feet / 750 metres (according to the Fitbit, which I don’t totally trust). We took around 3 hours in total again, including short breaks (not the lunch stop). The main ascent to the saddle took 1 hour 10 minutes, the descent back to the car from there about 55 minutes.

Deciding against the summit

Tackling the firebreak instead 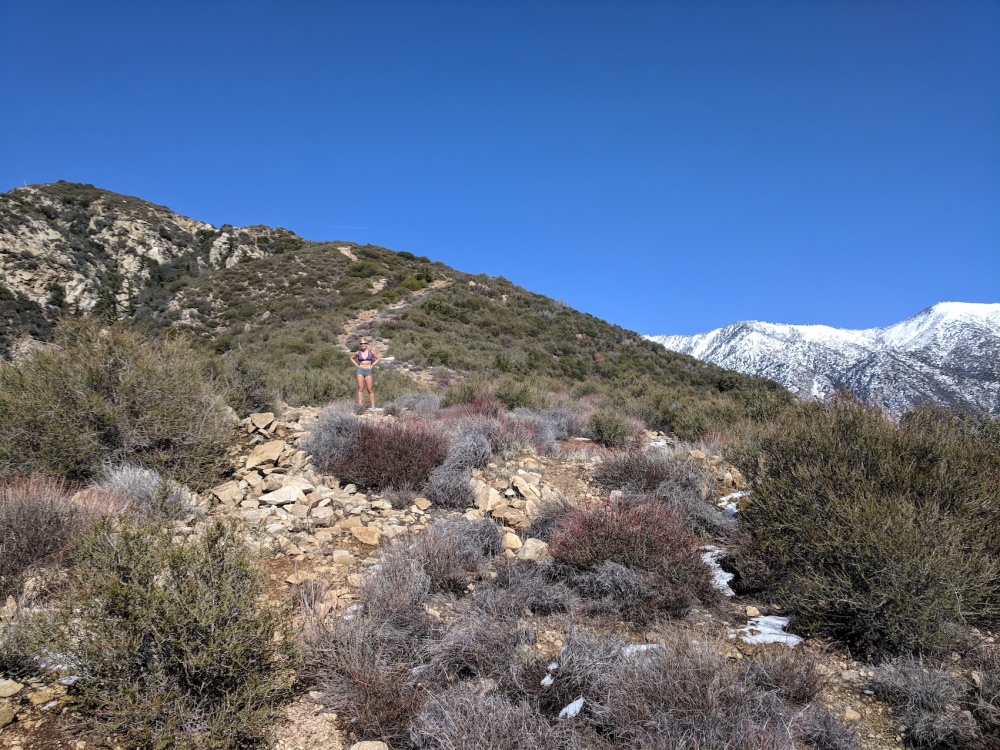 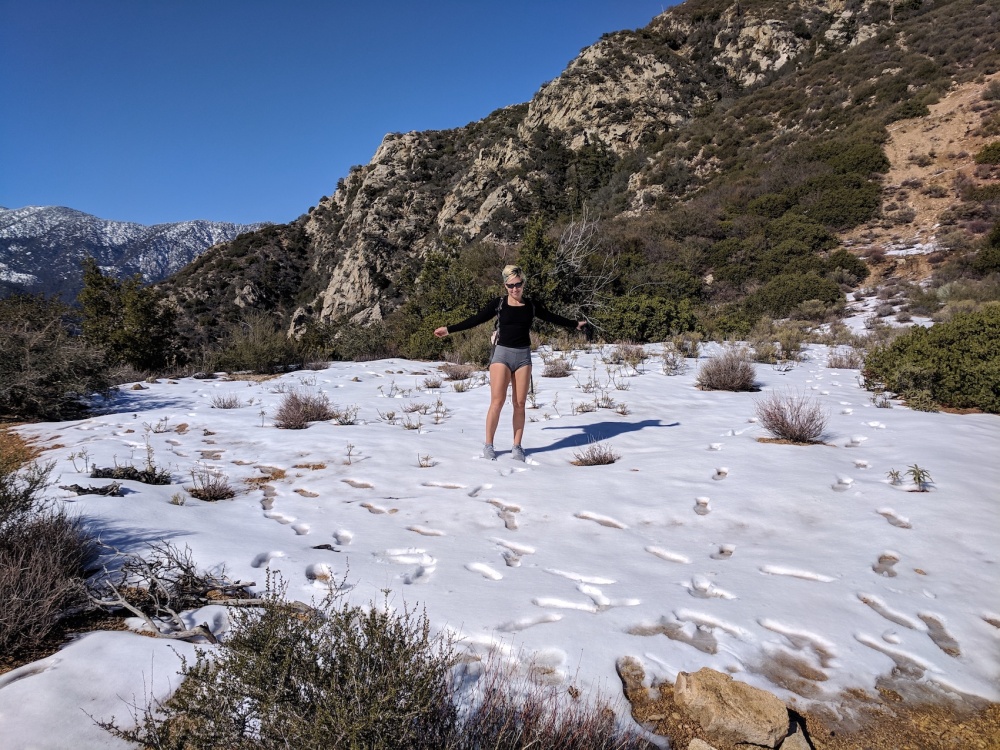 Crossing into the Wilderness 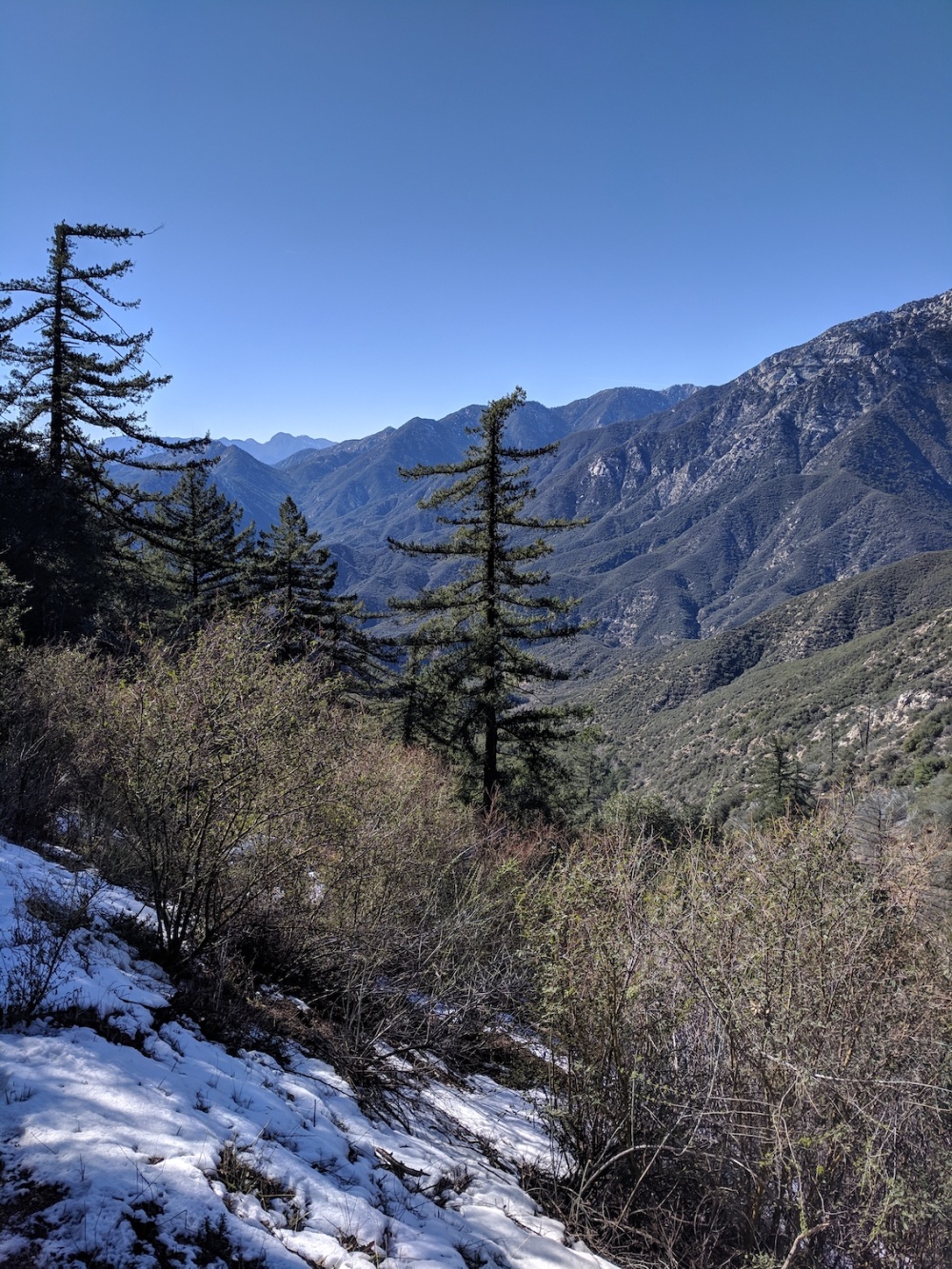 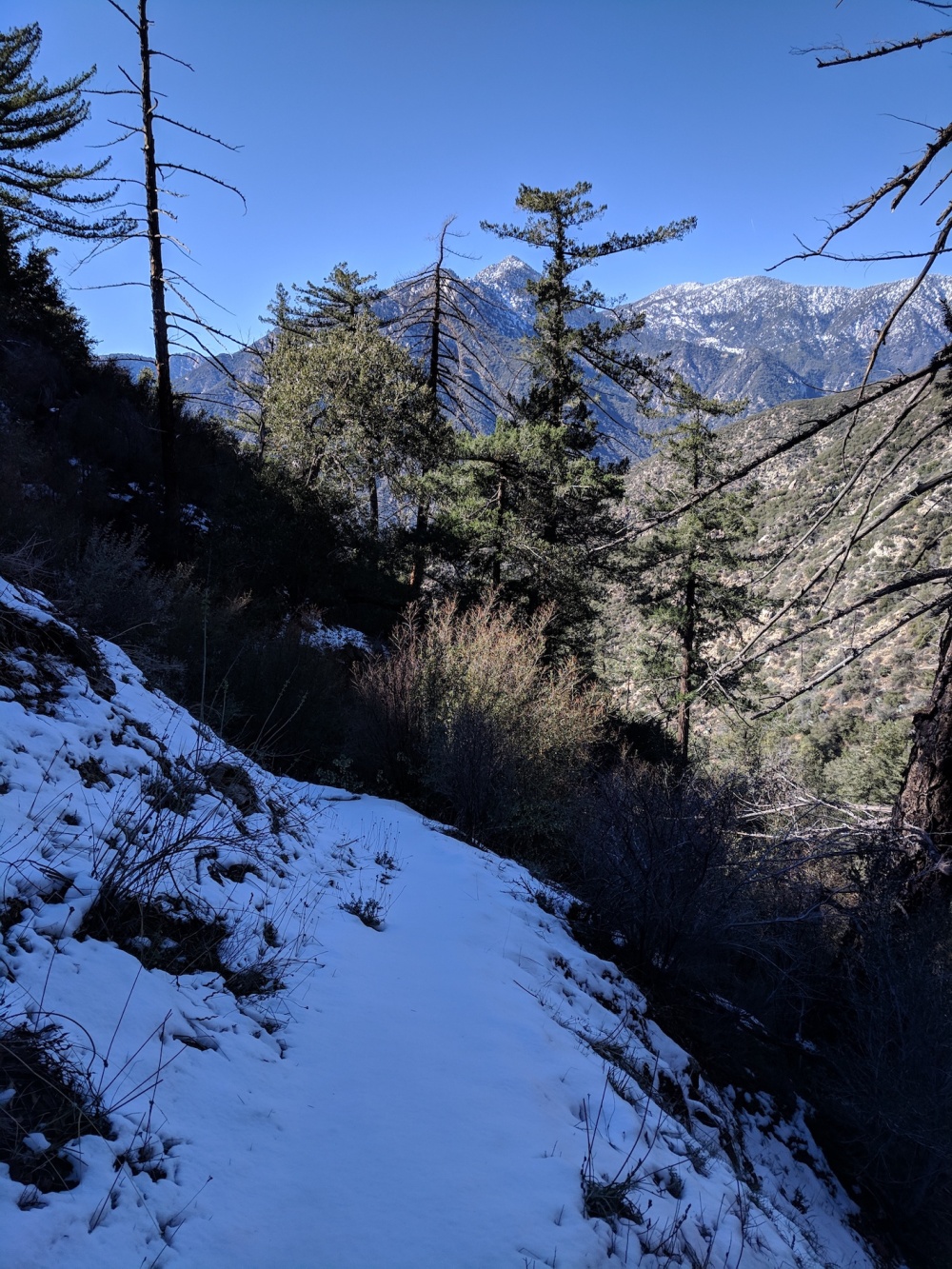 …but giving up here