Distance: 4ish miles (6.5ish km) round trip
Time: 1h45m including 15-minute picnic
Elevation gain: around 600 feet (183 metres) gain and loss
Difficulty: terrain, navigation, and fitness-wise all easy
Drive: 30 minutes by car from Pasadena old town
Trails of the Angeles hike no. 17 (but we stopped where this route drops down into the Arroyo Seco gorge)

In the middle of a Sunday afternoon when the sun had just come out, we wanted something short, sweet, and quickly accessible from Pasadena.

We parked on the Angeles Crest Highway rather than driving down to the car park by the picnic area, and enjoyed the half mile down the steep winding road.

Starting by crossing the bridge at the south end of the car park, we followed the hike as described until we got to what the book describes as an ‘unmarked junction’ with the Arroyo Seco trail heading southwest (now clearly signposted, to Altadena). Having walked most of the time until now along the riverbed among trees (with ten or so easy river crossings involving stepping stones), we were enjoying being higher up and out of the trees, so we opted to ignore the rest of the route and strike off down the (still closed) southwesterly trail (naughty us). 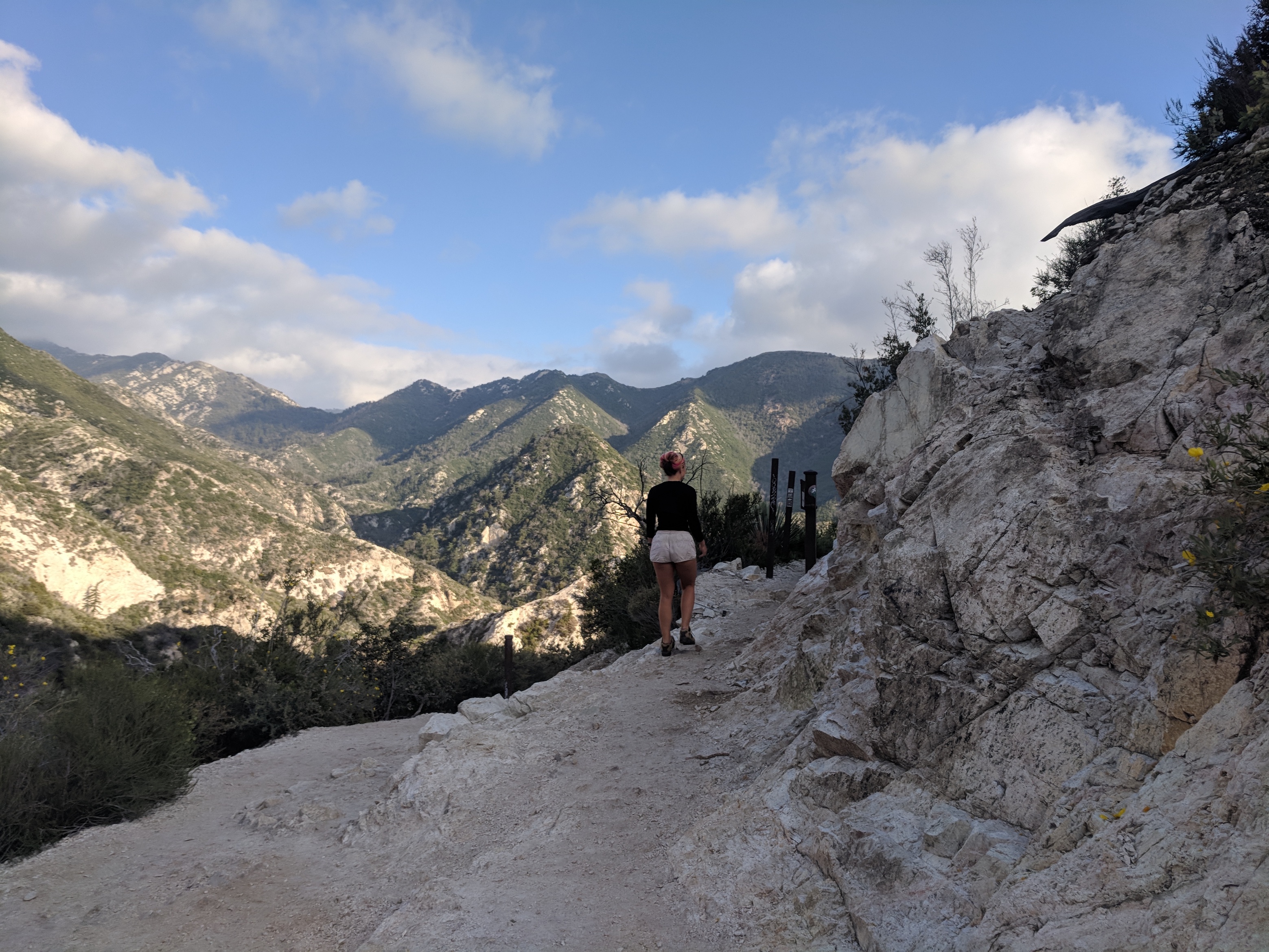 We walked far enough (maybe a bit more than half a mile) to round a bend that brought us out in evening sunshine, where we had a panoramic picnic on the path (not much danger of seeing anyone else) before retracing our steps. 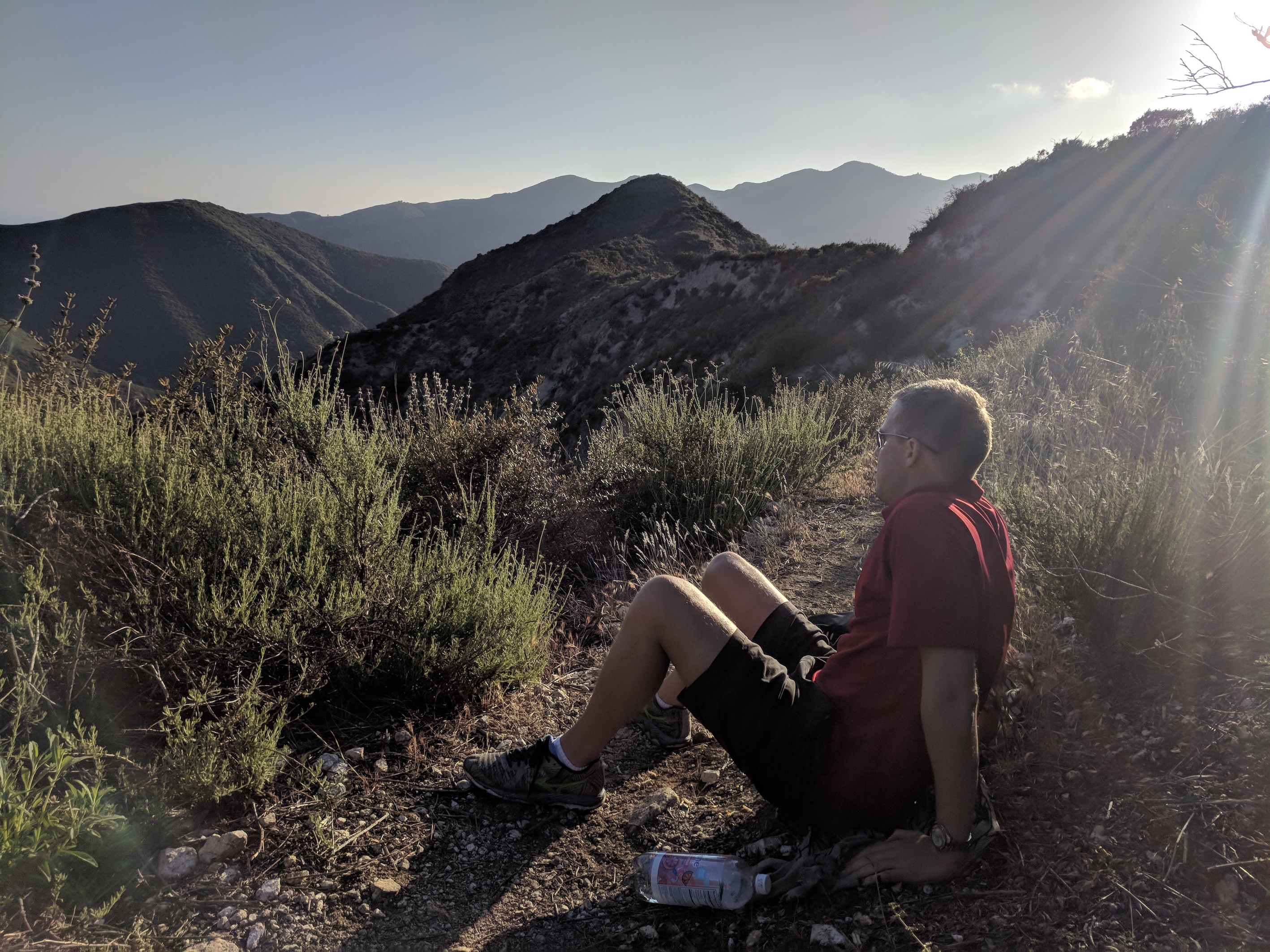 The book version isn’t the ideal walk for pretty views, and we can’t comment on the quality of the waterfalls (pretty much non-existent right now would be our guess), but if you include the walk down from the main road and do our prohibited variant, you get some nice ones. 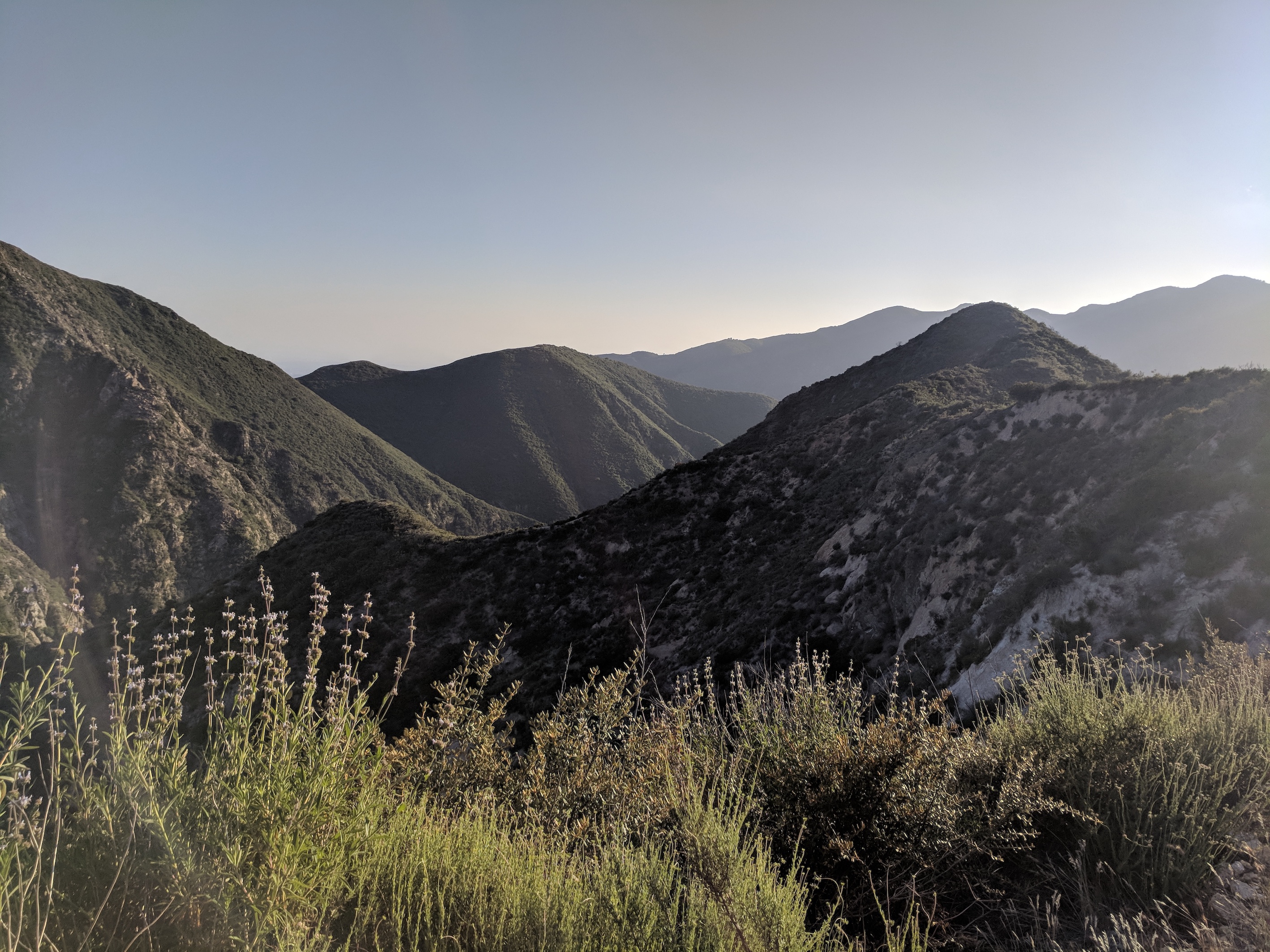 Update September 2019: This time we did the proper route down into Bear Canyon. It was horrible! We did it on the Labor Day holiday, which was a mistake, since it was heaving—not only with humans, also with flies.

Rough details: It was 1.5 miles (2.35 km) to the stream crossing; another half a kilometre to where the path drops down into the gorge; 2.1 miles (3.4 km) and 45 minutes to the Bear Canyon trail (you can turn left for the falls here, but waterfalls are always disappointing, especially in Southern California at the tail end of summer, so we didn’t). Then it was another 2 km to the Bear Canyon campground. We carried on a bit from there, hoping the gradual rise of the canyon, eventually meeting the Tom Sloane trail over to Mount Lowe, might give us something better than the tedious buzzing slog along the streambed. But it didn’t, so we turned round after about another half a kilometre, getting back to the campground at about the 1 hour 40 mark (and 4.3 miles / 7 km). There, giving up on anything like a view or a break from the flying pests, we had a reluctant and record-breakingly quick lunch (7 mins for bagels and crisps!), though we did spot a beautiful specimen of bouncy fauna (see below). On the way back we had a traumatic moment thinking we might strip off for a swim/paddle in one of the deep pools along the path. I was just bending down to untie my laces when James pointed at a rattlesnake meandering through the sun-speckled water. We were back at the junction with the Falls path after 2 hours 35 minutes, and to the car at 3.5 hours, after 8.5 miles (13.6 km) total.

Modern Hiker has a better description here, though he’s oddly positive about everything including the nasty campsite!