Distance: 8 miles
Time: I think we took about 3.5 hours including stops
Elevation gain: around 2,700 feet
Difficulty: fitness-wise, moderate; terrain-wise, easy (except the last section up to the peak, which was loose enough under foot to count as moderate); navigation-wise, easy
Drive: 45 minutes (30 miles) from central Pasadena, via the 210, the 2, and the 3
Dan’s Hiking Pages has several route options, stats, and a map here

Jones Peak is one of the forward-most peaks of the Front Range, rising steep up from Sierra Madre directly north of the Santa Anita race course. It has the benefit not just of a nicely Welsh name, but also of two beautifully different trails on its east and west sides: the former a standard fairly arid canyon trail, the latter a verdantly varied path up through (not too dense) forest. Dan of Dan’s Hiking Pages offers four variants on routes up and down Jones; we did the loop up the old Mount Wilson trail through Little Santa Anita Canyon to the east of Jones, and back down Bailey Canyon to the west. I think this is the right way round: going up the west side would be a bit of a slog.

See Dan’s pages for a full route description (we did this hike long before deciding to do a blog!): for our route, use the “Trail Description (Mt. Wilson Trail / crossover trail)” and then the “if you are doing the hike as a loop” section. The basics are: from the Mount Wilson Road trailhead, it’s 3.7 miles up to the top and 3.3 back down the other side (see the map at the bottom of the page), followed by a mile along a suburban street or two back to the starting point.

As for our general impressions: this was the first of the hikes we did where the vegetation (on the way up) felt truly varied and lush and not drought-parched. Dan warns of lots of poison oak, but there are many other plants and trees to enjoy (in March, when we walked it, many of them were in flower), and excellent views from the trail and a helipad clearing, back down to Sierra Madre framed by the foothills.

The “crossover trail” that leads up to the ridge and saddle north of Jones is pretty steep and lacks the shade of the lower trail, though on the day we did it it was overcast, and actually seriously grey and appropriately Welsh-feeling at the top. Not too chilly for a beer and a brownie before heading back to the saddle and then dropping down into Bailey Canyon, though.

Sierra Madre opening up below.

Beautifully varied vegetation all the way up the eastern side of the mountain.

Looking up into the brooding hills from the helipad.

A higher-up version of the Sierra Madre view from earlier.

The junction with the Bailey Canyon trail, after the steep ascent via the crossover trail from the Mount Wilson trail. As the Welshman helpfully indicates, straight ahead for Jones! 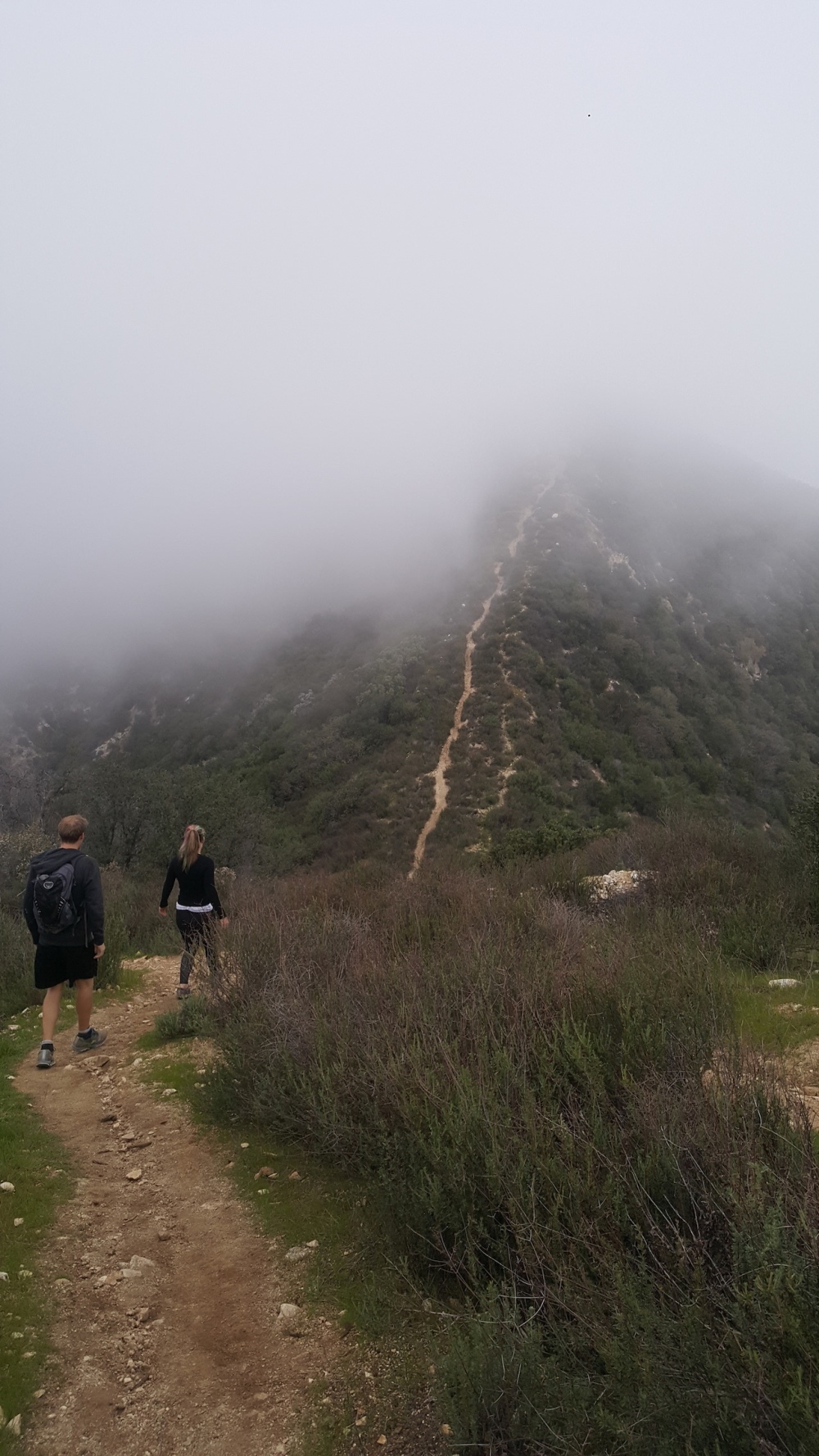 Down to the little saddle before the final scramble up Jones, now living up to its Welshness by being invisible in cloud. The heather felt rather British too.

Compass and Coors stand in for views at the top.

Atmospheric attempt at a sunset from near the top of the Bailey Canyon trail.

Our route is the smallest circle, up the Mt Wilson trail, across the dotted line north of Lost Canyon, back down Bailey Canyon, and along Carter Avenue back to the car.

One thought on “Jones Peak”